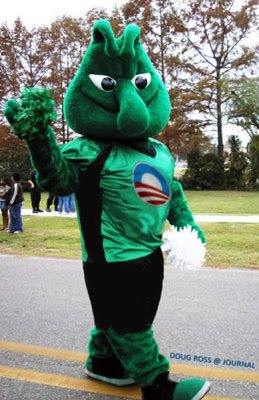 "Our hope is that we can really pump up turnout with 'Failie'," said Obama Senior Campaign Adviser David Axelrod, "that's what our focus groups told us: everyone has failures in their past, and this president is no different."

"Look at that insurance company's duck. It's a f***ing duck! It increased sales like a gazillion percent for them. And how about those cavemen? You're telling me a cute, fuzzy mascot won't swing voters to Democrats, no matter how f***ed up the economy is?"

The Democrat National Committee and George Soros helped fund the mascot design effort, along with laundered taxpayer dollars through the SEIU. The Senate majority leader also played a key role in the focus groups that approved the new mascot.

"Harry Reid, who is a true creative genius, really helped us craft the approach," said Axelrod, "We could tell when 'Failie' danced into the room that we had a winner. Harry was clapping and laughing and squealing like a little girl as the mascot launched into a series of Party anthems including F*** the Constitution, the Soviet National Anthem (Гимн Советского Союза) and Democrats über alles."

"Look, anyone with an ounce of sense knows that we've f***ed America up beyond recognition. We had a Stimulus program that destroyed our balance sheet... we passed a 'health care reform' bill that stole half-a-trillion from Medicare and bankrupted Medicaid... and we passed a 'financial reform' bill that didn't address Fannie Mae or Freddie Mac. Plus, as an added bonus, we started a 'war of choice' in Libya. Best of all, we did everything against the direct will of the people! So we thought: hey, it's time for a mascot!"

Axelrod explained that, given the infantile thought processes of the left, Democrat pollsters were predicting that turnout among progressives would increase roughly 3.9% with a marketing campaign heavy on 'Failie' and light on the facts.