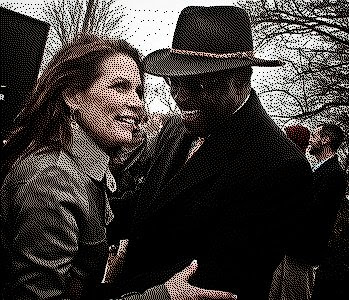 In the race for the Republican nomination, Mitt Romney still leads, but Michelle Bachmann has surged to second place. Herman Cain is the only other candidate in double digits...

Former Massachusetts Governor Mitt Romney continues to lead the race for the Republican nomination, but Michele Bachmann has surged into second place following her Monday night entry into the campaign.

Just 27% now believe the U.S. is generally heading in the right direction.

Say, I've been out of town for a while.

For you drones out there, that's a rhetorical question. As for you patriots, my beloved readers: would you like to support a true Constitutional conservative for President? Then support Michele Bachmann for President.

OH SHEEEEEEEEEETTTTTTTTT
obama stands NO CHANCE against her!!!!!!!!!!!!!

When Obama was an unvetted, media-abetted, unicorn-riding unknown, he was only able to garner 52.7% of the vote against a pathetic ("My friends...") GOP candidate.

The time draws nigh to save this Republic...

While I am a big fan of Michelle, she has voted repeatedly to renew and enhance The Patriot Act. How can you be a Constitution and vote for that onerous, unconstitutional law?

"Those who would give up Essential Liberty
to purchase a little Temporary Safety,
deserve neither Liberty nor Safety."

I will pull the lever for anyone who can beat our current marxist in chief.

Well since no conservatives will vote for Romney and he's only at the top because the MSM and GOP cocktail party put him there, it means that Bachmann & Cain are really 1st & 2nd. :)