Blogmocracy relays word that a videogame designed in Europe may send a politician to lockup for two years. 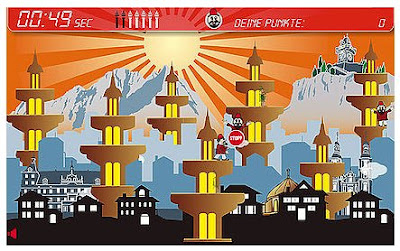 Players have to click on mosques and praying muezzins to make them disappear in the game which was taken offline after the Greens informed the police and state prosecutors. The FPÖ was initially tight-lipped over whether it produced "Moschee ba ba" before it emerged that a Swiss political strategist created the game for the right-wing party. The FPÖ argued muezzins were not shot in the game. The party said it intended to start a debate over a growing ‘Islamisation’ of Austria.

The FPÖ campaigned against more mosques featuring minarets in the Styrian ballot and other votes in the past years. The party said Austrians struggling in the credit crunch must come first. It called for a stop of immigration and a law which ensures no more mosques will be erected in Austria. There are hundreds of mosques, houses of prayers and Islamic community centres in Austria but just three mosques which have minarets. None of those three are situated in Styria. Muslims in the province have no plans to build any new mosques in the region in the foreseeable future. The debate about the issue and the disputed shooter game helped the FPÖ to bag 10.7 per cent of votes, up from 4.6 per cent in 2005.

...It is not the first time that the Styrian department of the right-wing party makes headlines with anti-Islamic actions. Susanne Winter had to step down as head of the FPÖ’s branch in the provincial capital Graz in 2008 after claiming that prophet Mohammed would be considered as a child molester nowadays. She also said that he wrote the Koran "during epileptic fits." Winter was given a three-month suspended jail term.

Banning books that some segment of the population could find offensive?

This is the inevitable result of 'thought-crime' legislation, which is why our First Amendment is so precious.