The new civility: Rolling Stone slanders Michele Bachmann as 'bats*** crazy', with 'testicles swinging under her skirt', a 'political psychopath'

The Left's 80-year war on the Constitution continues apace, its latest chapter written by a progressive nut named Matt Taibbi -- if that is his real name. His profile of Michele Bachmann in Rolling Stone is rife with the usual leftist tripe: childish name-calling and a half-baked, biased history. And it is even more devoid of facts, logic and reason than usual.

Furthermore, when it comes to Jon Huntsman's civility pledge yesterday, apparently Taibbi didn't get the memo. Among the unserious insults hurled Bachmann's way: 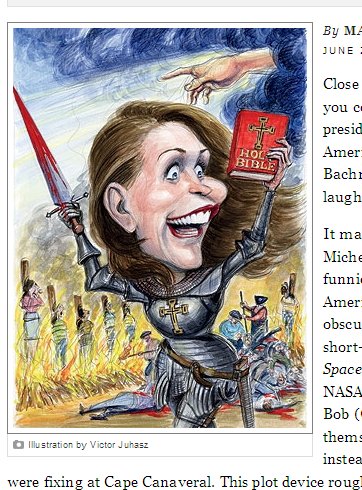 • Her Tea Party backers are 'dimwitted'

• She 'looks like the T2 skeleton posing for a passport photo'

• She's 'living completely inside her own mind'

• Her record is one 'of lies and embellishments and contradictions'

Someone who strikes this much fear into the far left kooks at Rolling Stone must be a damn fine conservative candidate.

Which is why the professional left wants the GOP to nominate the ludicrous Jon Hussein Huntsman.

Net net: Bachmann is now leading in the GOP polls.

Tremble, Taibbi. The Tea Party is coming for you and the rest of the Marxist left in 2012. And we are going to turn you America-haters out.

If we're already seeing the Matt Taibbi hit piece this early in the election cycle, the libtards are even more certain than I am that Michele Bachmann will be the next President or VP of the US, with a Republican controlled Congress.

That solidifies it, Michele for president 2013. They hate her, so I love her.

Well, she does have more balls then the average liberal, you have to admit.

a) the Rolling Stone article was obviously written before yesterday, and

b) the only person bound by Huntsman's pledge is Huntsman!