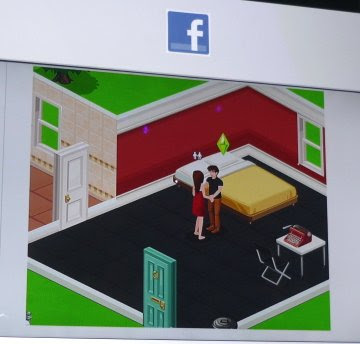 Electronic Arts is hoping to convince folks to covet thy neighbor's wife. Or that co-worker you've always lunched with. Or your college sweetheart.

...It's a game, like Zynga's Farmville, that encourages Facebook friends to play alongside one another. But rather than growing crops, EA seems to be encouraging friends to hook up. It's not really clear, though, because EA isn't talking much about the game, hoping teasing the game will create enough buzz.

"Lots of questions, but there's not a lot of information about the game," said Robert Lamvik, who works in the marketing department at EA. All Lamvik would offer is a canned marketing line about being excited that "the world's largest PC franchise is combining with the world's largest social network."

But a video trailer of the game hints at what's in store. It starts with Facebook messages between two women, noting that a certain guy's status has gone from "in a relationship" to "single."

"OMG!! They finally broke up!" one woman notes. And then she invites him to join her in The Sims Social. They dance, virtually. He prepares virtual tapas for her. They even watch a romantic film, holding virtual hands. "DID YOU KISS????" the woman's friend asks over Facebook.

That, and much more. The Sims Social couple moves into a bedroom to neck. Then, they strip down to their skivvies and jump in the shower together. Hearts float up from the shower and a "woohoo" can be heard, presumably from behind the shower curtain... In a press release, the company says that gamers can "engage with every aspect of their Sim's social lives from the intense emotion of a first kiss to the flawless execution of a hilarious prank." They can even "pee on a neighbor's lawn."

Another unintended benefit of the game: it will make visits to the Congressional gym a lot safer.