Runner-up headline: 'It is not a crime to be be here illegally'

Curious: I didn't read this in legacy media, but it seems that the Obama administration just bypassed Congress to implement its own amnesty program for illegal aliens. Never mind that our own elected representatives have rejected this sort of DREAM Act-style amnesty on eight (8) separate occasions.

President Barack Obama’s administration is quietly offering a quasi-amnesty for hundreds of thousands of illegal immigrants, while aiming to win reelection by mobilizing a wave of new Hispanic voters... The new rules were quietly announced Friday with a new memo from top officials at the US Immigration and Customs Enforcement (ICE) agency. The “prosecutorial discretion” memo says officials need not enforce immigration laws if illegal immigrants are enrolled in an education center or if their relatives have volunteered for the US military... 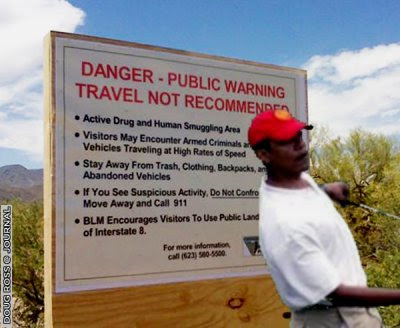 ...The Hispanic vote could be crucial in the 2012 election, because the Obama campaign hopes to offset its declining poll ratings by registering new Hispanic voters in crucial swing states... and [it] has maintained close ties to Hispanic advocacy groups, including La Raza. For example, La Raza’s former senior vice president and lobbyist, Cecilia Munoz, was hired by the Obama administration as director of intergovernmental affairs in 2009.

...When weighing whether an exercise of prosecutorial discretion may be warranted for a given alien, ICE officials, agents and attorneys should consider all relevant factors, including, but not limited to – the circumstances of the person’s arrival in the United States … particularly if the alien came to the United States as a young child; the Person’s pursuit of education… .. whether the person, or the person’s immediate relative, has served in the U.S. military,” said the memo.

“The factors are extremely broad and very troubling … [it] look like a stealth DREAM Act enforcement through non-enforcement"... The Development, Relief and Education for Alien Minors Act has been repeatedly rejected by Congress from 2001 to 2010... In practice, the new memo won’t make much of a difference because “ICE isn’t deporting people now,” said Jessica Vaughan, an analyst at the Center for Immigration Studies...

...On Friday, officials also announced a new advisory panel intended “to implement policies stopping the [deportation and] removal of individuals charged with, but not convicted of, minor traffic offenses who have no other criminal history or egregious immigration violations.”

“It is not a crime to be be here illegally,” claimed B. Loewe, a spokesman for the National Day Laborers Organizing Network...

Let me repeat: in the formulation of the hard-left Democrats, for whom the ends always justify the means, "it is not a crime to be here illegally."

Doesn't that just say it all?

This cynical administration is both reckless and lawless. And it's more than past time to say the I-word. Rep. Issa, are you listening?

You've noticed, perhaps, that Congress is playing a smaller and smaller role in governing?