The tragedy -- one of open borders and cop-killers -- is no laughing matter. But the line is a keeper 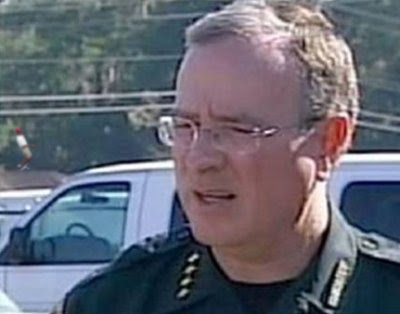 An illegal alien, in Polk County , Florida , who got pulled over in a routine traffic stop, ended up "executing" the deputy who stopped him. The deputy was shot eight times, including once behind his right ear at close range. Another deputy was wounded and a police dog killed. A state-wide manhunt ensued. The murderer was found hiding in a wooded area. As soon as he took a shot at the SWAT team, officers opened fire on him. They hit the guy 68 times.

Naturally, the liberal media went nuts and asked why they had to shoot the poor, undocumented immigrant 68 times. Sheriff Grady Judd told the Orlando Sentinel: "Because that's all the bullets we had." Now, is that just about the all-time greatest answer or what!

The Coroner also reported that the illegal alien died of natural causes. When asked by a reporter how that could be, since there were 68 bullet wounds in his body, he simply replied: ... "When you are shot 68 times you are naturally gonna die."

Snopes confirms the story, which was was too good to check anyway.

I remember the incident very well including the quote. Happened just a few miles from here

Yea, I believe the illegal dude had a pistol and was hiding under ground cover in a tree trunk. I think it was a swat guy who first caught on and started unloading his ammo. A fitting end to a piece of trash and certainly a future Democrat voter.