David Axelrod: Jon Huntsman was a staunch supporter of Obamacare 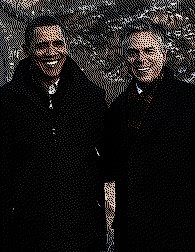 Isn't it interesting how legacy media and its Democrat sycophants (or is it the other way around?) like to position Jon Huntsman as a legitimate Republican candidate? Hint: he ain't.

Is Jon M. Huntsman Jr., the former governor of Utah, conservative enough to win the Republican presidential nomination? David Axelrod, a senior political adviser to President Obama, recalled on Sunday that Mr. Huntsman praised Mr. Obama’s efforts in 2009. “He was encouraging on health care. He was encouraging on the whole range of issues,” Mr. Axelrod said on CNN’s “State of the Union.” “He was a little quizzical about what was going on in his own party. And you got the strong sense that he was going to wait until 2016 for the storm to blow over.”

Huntsman has about as much chance of winning the GOP nomination as Ron Paul. Which is to say: none.

at 7:56 PM
Email ThisBlogThis!Share to TwitterShare to FacebookShare to Pinterest
Labels: Democrats, Obama

NONE is an understatement. we will send this fake packing back to his state controlled media leftist dogs.

When it was announced that Huntsman was headed to China for Obomb-ba, the entire state cheered!