...Western defense officials and experts were surprised to see more than 25 different Chinese models of the unmanned aircraft, known as UAVs, on display at this week's Zhuhai air show in this southern Chinese city. It was a record number for a country that unveiled its first concept UAVs at the same air show only four years ago, and put a handful on display at the last one in 2008.

The apparent progress in UAVs is a stark sign of China's ambition to upgrade its massive military as its global political and economic clout grows. 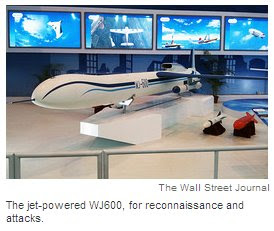 ...The U.S. and Israel are currently the world leaders in developing such pilotless drones, which have played a major role in the wars in Iraq and Afghanistan, and which analysts say could one day replace the fighter jet.

This year's models in Zhuhai included several designed to fire missiles, and one powered by a jet engine, meaning it could—in theory—fly faster than the propeller-powered Predator and Reaper drones that the U.S. has used in Iraq, Afghanistan and Pakistan.

...U.S. anxiety about China's UAVs were highlighted in a report released Wednesday by the U.S.-China Economic and Security Review Commission, which was formed by Congress in 2000 to assess the national security implications of trade and economic relations with China.

...The Chinese drone of greatest potential concern to the U.S. is the one with several missiles and a jet engine—called the WJ600—which was displayed by China Aerospace Science & Industry Corp., or Casic, one of China's top weapons makers.

Casic officials declined to comment, but a video and a two-dimensional display by the company showed Chinese forces using the WJ600 to help attack what appeared to be a U.S. aircraft carrier steaming toward an island off China's coast that many visitors assumed to be Taiwan...

And all this time I thought the most important Constitutional duty of the federal government was to protect America and its borders.

Apparently, based upon the actions of President Obama and Democrats in Congress, I was mistaken.

If anyone wants a good, long read; check out Dragons Fury by Jeff Head ( http://www.dragonsfuryseries.com/ ). The Chinese develop a hypersonic torpedo that takes out all of our carriers....think it can't happen? It's very plausable.