As if California didn't have enough problems -- from a massive budget deficit to runaway illegal immigration -- news that the powerful public sector unions are raping the system should certainly cheer taxpayers.

Thousands of newly retired school administrators will earn more during retirement than most Californians will make during their working careers.

The number of educators receiving $100,000-plus annual pensions jumped 650 percent from 2005 to 2011, going from 700 to 5,400, according to a Bee review of data from the California State Teachers' Retirement System... [these retirees] get millions more than they put into the system. 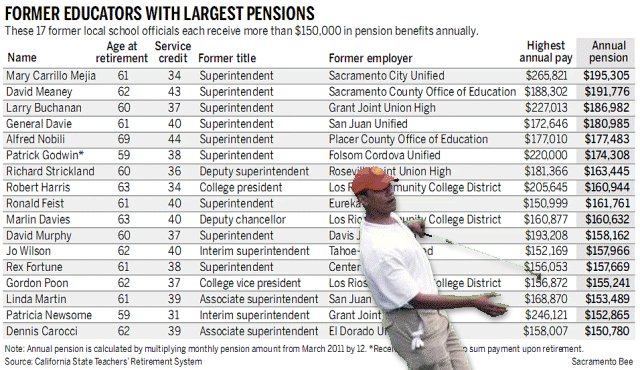 Booming administrator salaries are largely behind the trend. Public school superintendents, on average, earned $168,000 in base pay last year, roughly 56 percent more than they did 10 years ago... A series of benefit enhancements a decade ago also explain the rise... as a result, more than a third of the state's six-figure pensioners earn more each year in retirement than they ever did on the job.

...Like other public pension systems, CalSTRS has financial problems. The value of its assets isn't enough to cover what it has promised in benefits. System officials estimate CalSTRS will be unable to fund benefits in about 30 years unless the Legislature implements higher contribution rates for school districts, employees or the state.

California isn't alone. The Manhattan Institute estimates that teacher pension systems around the country are, in aggregate, $1 trillion underfunded.

But California and its ludicrous governor, a product of the public sector unions, are completely off the rails. Like the blue states of Illinois and New York, the inevitable result of Democrat governance -- bankruptcy -- is obvious for all to see.

A few years of $100k and then nothing versus $40k for life. I guess it will even out, but the economy in those states will be destroyed, even after everything is cut. There is a reason, in spite of China being declared a or even "the" rising economic star. No one will put much money there because it gets stolen with state approval, if not by the state, so China isn't trustworthy but for the wildcats.

Actually, I think Cali and Ill are both in that bracket now, it's a personal matter as to why any businesses stay. Eventually the private sector there will be the anemic stuff you see in Cuba.

Bill Gates adds great commentary to this topic (from TED 2011)


America's school systems are funded by the 50 states. In this fiery talk, Bill Gates says that state budgets are riddled with accounting tricks that disguise the true cost of health care and pensions and weighted with worsening deficits -- with the financing of education at the losing end.

Odd, these HUGE pensions when California is cutting back on road maintenance:

Crews are down to half what they were a few years ago and our roads show it.

Of course, the legislature has been raiding the highway gas tax trust fund to pay for other "necessities."