Hey, Chris Wallace: do you know how many people called Michele Bachmann a 'flake' before you slandered her on Sunday? None, dimwit. 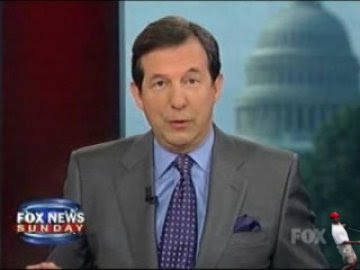 Through the magic of a cool new research tool called Google (you may have heard of it, Chris), I decided to find out who had called GOP presidential candidate Michele Bachmann a "flake" prior to Chris Wallace's interview.

After all, Wallace had asserted that was "the rap" on Bachmann.

To test this assertion, I constructed a fairly complex query (here) that found all pages that mentioned:

• 'Michelle Bachmann' and the word 'flake'

Here are the complete results:

Er, Chris, no one had called Bachmann a 'flake'.

Which means one of two things: you're an agenda journalist trying to demean a conservative female... or... you were showing off for Jon Stewart.

In either case, you're a decidedly unserious choice for any job at Fox News.

We can tune into ABC, CBS or NBC for this type of horsecrap.

Wallass has too many incidents to let him off the hook now, I say we Weinerize him. Lars

Unbelievable. The general discussion is that the question posed "got it out there" and "allowed her to answer her critics", but for me, though it is not a loaded question it clearly makes use of loaded language, is presumptive, insulting and utterly inappropriate... the scrub. Would he ask Barack Obama any of these:

Are you a socialist?
Are you trying to destroy the nation's economy?
Do you really believe you can spend the nation into prosperity?
Who died and made you king?

Well, come on Chris, that's the rap. Don't you want to afford him a chance to answer?

Michelle Bachmann is going to be our next US President and actually the first "President" we've had in 5 years - since King National Socialist Community Organizer is not a Constitutional office in my country.

let's do ourselves a favor for a change and nominate a conservative that the Leftist Freaks Ruining Our Nation are actually afraid of.

how's that for an idea?

let's kick some f'g ass, and turn the nasty question back around on these Leftist Posing As Journalists. and Chris Poser Wallace I'm talking at you B.

She is a flake when she claims NATO has killed 30,000 civilians in Libya.