An Open Letter to Janet Napolitano [Papa B] 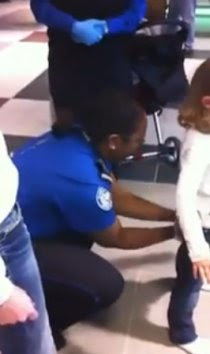 Would it be too much to ask that you hire someone smarter than a lemur to run TSA at the airports?

Because if the objective is to provide air safety, you are instead helping to destroy the airline industry, you are creating massive amounts of stress, and you are wasting billions of our tax dollars. But if the objective is to destroy the airline business, create stress and angst for travelers, and provide employment to thousands of marginally competent people, you are doing a superb job!

I am 75 years old, I have a defibrillator implant, and some of my more vital statistics include: (a) an American Express card holder since 1960; (b) a Delta Medallion member for over 20 years; and (c) have owned my home (my primary residence) for 15 years.

These facts are easily available from any of the credit reporting agencies. Let me also assert that it is extremely unlikely that any would-be terrorist would possess these attributes or metrics.

Nevertheless, since I cannot go through a scanner, I am routinely subjected to a 25-minute fondling at LaGuardia airport. Behind me and "stacked up" during this time are severely handicapped individuals in wheelchairs, elderly people with canes or walkers and, of course, the ever-dangerous group of small children.

At the very least, could you not locate a few smart people to do some basic studies of travelers that would separate, say, non-terrorists from possible terrorists by dint of measurable and meaningful characteristics? And please note: there's not a hint of racial profiling in what I suggest.

I feel certain that for all of these reasons, you will ignore this and other logical suggestions because of your bizarre ideological bent, the fact that you are a political hack, that you are a radical leftist, and that you are a Democrat.

But I repeat myself.

Janet Incometano is doing Hussein's dirty work and that is getting the Goobermint involved after a crisis is created.
In a few years further revelations will see these people incarcerated for their crimes. The trouble is, being RATS, they like to be watched while they commit felonies. The Americans will not forget, the 51% who don't pay taxes won't.

Gee anonymous, shouldn't that be:
"Americans will not forget, the 51% who do not pay taxes will." Works either way for me though.

Airport, hassles, high gas prices,short range electric cars, TSA for trains and buses all point to the over all goal. Preventing or reducing the average persons mobility and forcing them to live in the cities and limit the travel of large groups to places like Washinton.

Actually, TSA is a ploy to get more Americans to ride Amtrak.

My teenage daughter specifically asked to ride the train rather than get a patdown at the airport.

It seems to be working.