If this chart doesn't terrify you, you're either incredibly stupid or you are a Marxist kook hoping for the collapse of our society.

...In roughly 20 years, the typical American’s share of the national debt will more than triple unless Washington gets the nation’s fiscal house in order. Right now, the national debt averages $31,871 for each American—nearly two-thirds of the median household income of $50,255. The Heritage Budget Chart Book illustrates that without any real spending cuts or reforms, debt will surge to $103,827 per American by 2032 and keep rising. 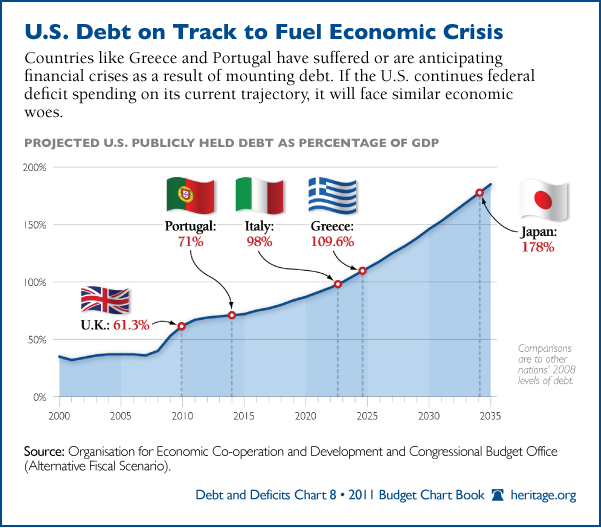 “For younger generations, the story gets worse,” says Alison Acosta Fraser, director of Heritage’s Thomas A. Roe Institute for Economic Policy Studies. “By 2044, each American’s share of the national debt will redouble to $206,771. And it keeps going up after that.”

The situation is already dire. In only a few short years, if we continue on the Obama glide-path, this country is headed into the abyss.

And that seems to be what the Democrats want. Which is why they must be eradicated at the ballot box in 2012, at every level of government.

So, today I found out that, as a citizen of Cook County IL, I owe $63,525 to cover local government debt; last week USA today showed that I owe $534k for unfunded federal mandates; and now you're telling me that, as of today, I owe $31,871 on the National Debt and can expect that to rise to more than 100K in the next 20 years.