When it comes to fighting unionization, Subaru's story is an instructive one.

In its 22-year history—a period that has spanned three recessions, a global financial crisis, massive U.S. auto bankruptcies, and the departure of Isuzu, a founding partner, from the operation—SIA has rolled out more than 3 million 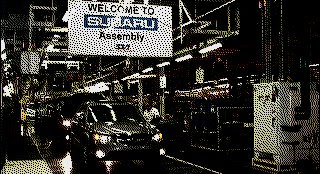 vehicles and has never resorted to layoffs. Instead, it's given workers a wage increase every year of its operation. Staffers also enjoy premium-free health care, abundant overtime ($15,000 each, on average, in 2010), paid volunteer time, financial counseling, and the ability to earn a Purdue University degree on-site—all in a state that has lost 46,000 auto jobs and suffered multiple plant foreclosures in the past decade.

...To score a cherished "associate" position at the factory—there's a 10-1 ratio of applicants to openings—would-be employees are expected to put in long hours learning and practicing SIA's low-impact manufacturing. That means scrutinizing every byproduct, from welding slag to plastic wrap, for savings. And obsessively slicing seconds off assembly procedures. And a willingness to work whole months of six-day shifts, and likely years on the graveyard shift, while resisting the siren call of unionization. (The United Auto Workers has failed three times to organize the plant's workers.)...

As an aside, congratulations to Wisconsin Governor Scott Walker: the Wisconsin Supreme Court just upheld the collective bargaining reform bill. And don't look know, but similar measures are coming to states like... Massachusetts.

And zero landfill waste. I can only imagine how badly the UAW would screw this plant up. Actually, the beauty of living in Indiana is that I don't have to imagine. I can just drive down the road to Anderson, Kokomo, or Marion to see all of the shuttered GM and Chrysler facilities.