Over the past several years, the phrase "trouble in Greece" was routinely used to explain the occasional market tumble here in the U.S. Lately, though, the broader "European contagion" description is heard more frequently as banks in central Europe try to avoid a seemingly inevitable series of sovereign defaults.

Why should you care?

Put it this way: if immense global banks seize up, even if they are headquartered in Europe, the reverberations will be felt here in America.

...markets are saying that default by Greece is inevitable. Greece is expected to run out of cash within weeks and massive civil unrest may slide into anarchy as protests become increasingly violent. The bailout by the European Union that was supposed to save Greece appears to be on the verge of collapse according to The Wall Street Journal... "Europe’s failure so far to rescue its first patient has had immense consequences for the 17-nation euro zone, despite the fact that Greece’s economy is but a tiny fraction of it." 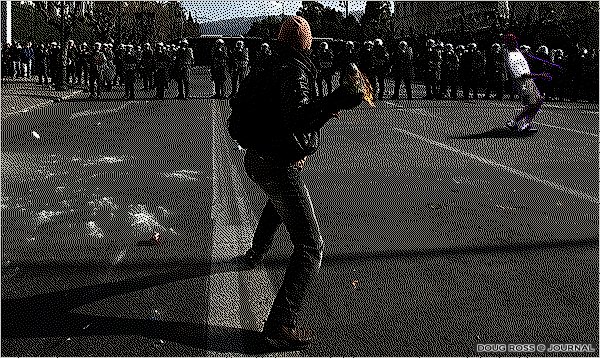 ...Greek citizens have responded to the looming default of their government by withdrawing their money from Greek banks at a record pace. Greek banks have reportedly run out of safety deposit boxes as Greeks withdraw their life savings to put into bank vaults... "In May alone, almost €5bn (£4.4bn) was pulled out of Greek deposits, as part of what analysts describe as a 'silent bank run'... Bags of money in garages, frightened savers fleeing banks and even the country: these aren’t the sort of stories you associate with a comparatively-prosperous European country, but with a developing one facing a life-or-death economic crash.

The problem with a Greek default involves the subsequent and inevitable chain reaction. The troubled country's debt is owned in great part by banks throughout Europe -- especially in France and Germany -- and panicked depositors are unlikely to weigh the solvency of their own personal bank. If hysteria and fear spread, much of Europe could suffer bank runs.

As bond yields spike in Portugal, Spain and Italy, it becomes increasingly clear that the market anticipates a series of defaults on sovereign debt that no one on Earth can backstop.

And, as it turns out, Germany is already preparing for the inevitable Greek default.

Germany's Finance Ministry is studying the potential impact of a Greek debt default, working through scenarios which include Greece abandoning the euro to reintroduce the drachma, Germany's Der Spiegel magazine reported on Saturday.

Greece is “on a knife’s edge,” German Finance Minister Wolfgang Schaeuble told lawmakers at a closed-door meeting in Berlin on Sept. 7, a report in parliament’s bulletin showed Thursday. If the government can’t meet the aid terms, “it’s up to Greece to figure out how to get financing without the euro zone’s help,” he later said in a speech to parliament.

Greece has vowed to avoid default, no matter the consequences for its government.

George Papandreou has vowed to fully implement reforms demanded by international lenders so that Greece will be able to avoid default and remain a member of the eurozone.

...Thousands of protesters shouting anti-austerity slogans gathered outside a conference centre in the northern city of Thessaloniki where the premier was making his annual economic policy speech on Saturday... Riot police fired teargas to disperse protesters as a dozen separate groups, including public sector trade unions, university students and supporters of a local football club, staged marches around the city centre.

Mr Papandreou said he was committed to carrying out this week’s cabinet decisions: immediate cuts in civil service salaries and the planned dismissal of 20,000 public sector in the next few weeks – a condition for Greece to receive the next €8bn tranche of its current bail-out loan...

But Greece will default; the markets are predicting that outcome with essentially 100% certitude:

Greece’s historic record bond yields have forced the markets to recognize and read the proverbial financial writing on the wall... Greece ... is set to default.

...The fact that Merkel, and by extension Germany (the final stop between the Greek economy and default), is now prepping the nation’s banks for Greece’s default could not be a clearer economic and political signal to the market that “bad times are coming” for not only Greece, but the entire European Union.

What’s most interesting, however, is the future of the European Union, post -Greece’s-seemingly-inevitable default. For while Greece is today’s “problem Economic child,” its soon-to-be-failed brethren (i.e Italy, Spain, etc.) are close behind, busy elbowing for a place at the default table.

Let’s see what happens once Germany officially steps out of the way of the cliff.

My prediction is that within a month (three at the very outer, outer limit), a default by Greece will touch off the greatest financial crisis since the Great Depression.

An economist interviewed Friday on Bloomberg Radio -- not exactly a hotbed of doom-and-gloom talk -- predicted that gold would hit $7,000/oz. as investors flee to the world's one true reserve currency: a yellow-toned metal.

at 8:55 PM
Email ThisBlogThis!Share to TwitterShare to FacebookShare to Pinterest
Labels: Economy, World

THEY SHOULD PUT GREECE ON EBAY.

seriously: greece is the global lehman.

At least Greece got their Olympics in prior to their country finally fading to history. (Not to worry all you bankers who gave them loans...they have plenty of islands to give you to make up for the olympic size loans for the Olympics that really mean nothing!)