This story could give you chills.

I wrote a few days ago about the city officials in New Mexico's border town of Columbus indicted for smuggling firearms and tactical gear to the La Linea drug cartel. As it turns out, that case may be linked to "Operation Fast and Furious", the malevolent Justice Department project that shipped thousands of murder weapons to Mexican drug gangs.

Here's the interesting part -- over the transom comes the following tip:

In Count 23, On January 25, 2011, federal agent(s) watched as two suspects purchased a total of 20 American Tactical 9mm pistols from an FFL in New Mexico, drove with two more persons about 27.5 miles in about 32 minutes to an apartment in El Paso, TX. They stopped at a Kmart and bought a black backpack. They entered the apartment with the black backpack and the box containing the 20 pistols. Shortly two individuals exited the apartment, with the now-full black backpack and drove, with the black backpack, in an unmarked Ford F-150 police vehicle registered to the village of Columbus, TX to the El Paso bus station (which is less than 1/4 mile from the Santa Fe Bridge Border Crossing between El Paso and Juarez).

In count 24, on January 27, 2011, federal agents watched as a Honda Pilot with Chihuahua plates occupied by two of the men from the Jan. 25 event, and an unknown female, pulled up to the apartment. Two men unloaded and carried into the apartment a large black suitcase. Two hours later, one of the men who had bought guns on Jan. 25 exited the apartment, wheeled the large black suitcase to the unmarked Ford F-150 police vehicle registered to the village of Columbus, NM, and drove to the El Paso bus station (yep, the one less than 1/4 mile from the Santa Fe Bridge Border Crossing between El Paso and Juarez).

So how do the statements made in those two counts in the indictment square with paragraph ten of the media's story announcing the arrests and unsealing of the indictment?

"As part of the investigation, every effort was made to seize firearms from defendants to prevent them from entering into Mexico, and no weapons were knowingly permitted to cross the border." 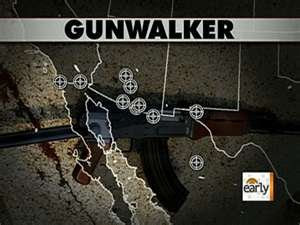 How many opportunities did they have to interdict the firearms along the way?

How far from the border do they have to be when they avert their gaze to say they did not "knowingly" allow firearms to cross the border?

There is no indication that any of these 20 9mm pistols were seized or in any way accounted for. The activities reported in both counts 23 and 24 happened more than one month after the death of US Border Patrol Agent Brian A. Terry.


Those are damn good questions.

So I repeat: what did Eric Holder know? And when did he know it?

But...but...this was a "botched sting operation." That's what the media says. A "botched" investigation. Doug, you read those facts as if allowing the transfer of guns to the cartels was the plan.

terry gilbert(?) talk show lady on kfyi in phx was talking about this as i was falling asleep last night....she said there is proof that hillary, janet and the president were aware of this program and it is rumored that the president has in fact been supoenaed....i'll have to listen to the pod cast...i was very sleepy but that's what i think i heard.......