Hoffa Declares All-Out 'War' on GOP: 'Take These Son Of Bitches Out'

Self-proclaimed Marxist Dick Trumka Jimmy Hoffa, Jr., president of the AFL-CIO Teamsters, had some uncivil, inflammatory words for Republicans today in the lead up to President Barack Obama's remarks in Detroit. 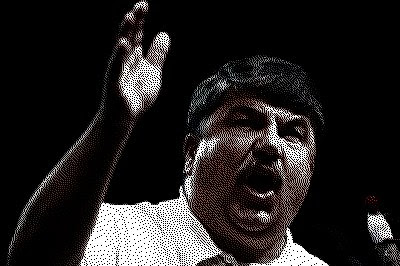 Teamsters President Jimmy Hoffa had some profane, combative words for Republicans while warming up the crowd for President Obama in Detroit, Michigan on Monday.

"We got to keep an eye on the battle that we face: The war on workers. And you see it everywhere, it is the Tea Party. And you know, there is only one way to beat and win that war. The one thing about working people is we like a good fight. And you know what? They've got a war, they got a war with us and there's only going to be one winner. It's going to be the workers of Michigan, and America. We're going to win that war," Jimmy Hoffa Jr. said to a heavily union crowd.

"President Obama, this is your army. We are ready to march. Let's take these son of bitches out and give America back to an America where we belong," Hoffa added... Obama addressed the crowd shortly after Hoffa.

I believe that the Democrat Party, now controlled by the hard left, sixties retreads and funded by one-world-government Statists like George Soros, are actively preparing to foment civil unrest in the run-up to the 2012 elections.

In recent days, the execrable columnist Leonard Pitts, the ethically challenged Rep. Maxine Waters, the nonsensical Rep. Frederica Wilson, the rhyming adulterer "Reverend" Jesse Jackson and a host of other far left kooks have echoed the same "Big Lie" as if reading off some invisible teleprompter.

Their outrageous "Big Lie"? That a disconnected, decentralized group of millions of law-abiding citizens -- people of every race, religion, creed and color... people who believe in Constitutional, limited, financially responsible government... people who gather peacefully in cities and towns across the United States! -- are somehow malevolent because of the mere fact that they dare to speak up.

One can come to no other conclusion that the Democrat Party is actively encouraging violence.

We certainly don't hear much about civility and Gabbi Giffords from legacy media these days.

Because, in truth, the only people promoting intimidation, violence and thuggish behavior are the radical Leftist goons controlling the Democrat Party.

This behavior is disturbing and sickening. And legacy media better stand up and call it out, before it's too late.


Update: Moments after Trumka Hoffa declared "war" on Republicans and vowed to the "take the sons-of-bitches out", President Obama stated how "proud" he was of the AFL-CIO Teamsters chief.

Update II: Correction made, thanks to TAB: this was Hoffa, not Trumka. All these labor leaders look alike to me.

THO' THEIR THE SAME KINDA LABOR THUGS, IT WAS HOFFA NOT TRUMKA

Updated with correct labor leader... I always get these guys confused.

It is a testimony to the good morals and principles of patriotic Americans all over this great country that this immoral race and class warfare baiting from obama the usurper and his fellow ilk has bared no rotten fruit.

It is another testimony of how corrupt and evil the left is that it has resorted to such tactics, maybe even more pertinent, is the increasingly evident truth the left has no merits or values to run on, and this class/race baiting is something born out of fear, desperation, and the simple truth it is going to be defeated by the good people of this great nation.
People who are fed up and had enough of the lies, theft and evil nature of these tyrants and crooks who have been instrumental in the agenda of carpet bombing of America.
They are like vermin and cockroaches who have crawled out from under their rocks.

I am really enjoying the post-Giffords civility. It is truly something amazing to behold.

In a way it is wonderful to see just how corrupt and nasty the unions and democratic party,(I'm repeating myself), is.

It is glaringly every reason to vote our butts off come 2012 and end the destruction and hate these people hawk.

A facebook acquaintance posted this list of Obama accomplishments, and I thought you or a friend would love the chance to fisk it.
http://pleasecutthecrap.typepad.com/main/what-has-obama-done-since-january-20-2009.html

Yeah, those dirty guys... fighting for peoples rights, how dare they!

Those f*ckseeds have no idea what they are messing with. They are used to harrassing owners and supervisors in the middle of the night, on their own, and other mafia tactics. They play army and they will get their teeth handed to them. No one, and I mean no one, is on their side. The big Zero will end up locked in his tower like Saruman and his Uruk-hai union army will be crushed to a punk.