A Merry Dependent Christmas to You and Yours

An Electronic Benefit Transfer (EBT) card resembles a typical credit or debit card. The EBT system is used to deliver "public assistance benefits", like the old food stamp program. It's ostensibly designed to simplify the delivery of benefits and reduce the stigma associated with using food stamps, but it is rife with fraud and abuse.

In Massachusetts, for example, nearly 90 percent of EBT benefits are withdrawn as cash. 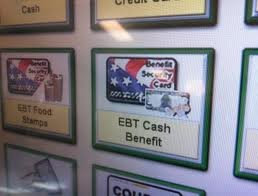 Does it make any difference for the state to ban the use of EBT (Electronic Benefit Transfer) cards at tattoo parlors, strip joints or package stores if beneficiaries can use them to get cash from an ATM?

What difference does any kind of control on the use of the actual cards make if the benefit can accessed in cash?

...According to that EBT Commission report, 85% of EBT benefits, or $77 Million in a three month period between October and Dec. 2011, were translated into cash at ATMs.

So what difference does a ban on EBT cards at liquor stores, strip clubs and nail salons make if you can withdraw benefits in the form of cash? If the latest info on Twitter is any indication, none.

Breaking down cocaine with an EBT.

I'm thankful for this EBT giftcard I got. Merry Christmas and Happy Birthday to the homie Jesus

I BOUGHT ALL MY FOLOWERS. THERES A SERVICE DAT ACCEPTS EBT. IM POPPIN, U NOT. STOP HATIN BITCH

“@rickanbagher: Micheal Kors must have had a sale huh”<<naw these hoes been saving EBT up since June

But, remember Mr. and Mrs. Taxpayer: even though the entire system is collapsing, there's nothing to cut.