REMEMBER HOW DIANNE FEINSTEIN USED TO CARRY A SEMI-AUTOMATIC AROUND TO PROTECT HERSELF? Yeah, that was fun. Good times.

On April 27, 1995, Sen. Dianne Feinstein (D-CA) spoke at the US Senate hearing on terrorism shortly after the Oklahoma City bombing.

During the hearing, she referenced her concealed carry permit and how she carried a gun with her in the 1970's, citing the urge to arm yourself for protection- in her case from threats... 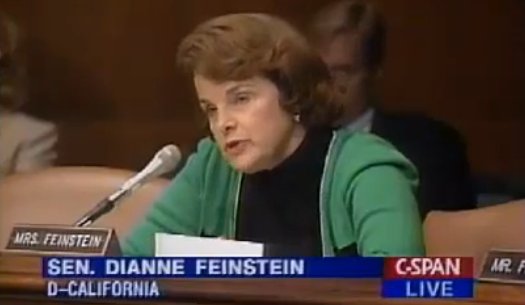 "I know the sense of helplessness that people feel. I know the urge to arm yourself because that's what I did. I was trained in firearms. I walked to the hospital when my husband was sick. I carried a concealed weapon and I made the determination if somebody was going to try and take me out, I was going to take them with me."

In 1994, Sen. Feinstein championed the federal assault weapons ban which expired in 2004 due to sunset provisions in the law.

In order to advance its ideological agenda, Mark Levin notes that the Left always twists the language:

• A "military-style weapon" is a semi-automatic rifle that resembles a military weapon, but operates precisely like a traditional hunting rifle;

• An "assault weapon", likewise, is a hunting rifle that looks scary;

• And a "high-capacity magazine" is a clip that holds more cartridges than some arbitrary threshold your betters arrived at.

We need to ban high-cap magazines because in the 20 min. it took police to get to the school, the kook never could have changed clips #guns

As for the British CNN host Piers Morgan -- who invites actual experts on his show only to shout apoplectic epithets at them -- perhaps a brief history lesson in in order:

.@piersmorgan Pop quiz: How many civilians died in the 20th century after being disarmed by their governments -- plus or minus 10 million?

It's called Democide. And, if history is any guide, free people have much more to fear from their governments than each other.

Dianne Feinstein is just another poster child for term limits. At 79 years old, she needs to be institutionalized, not in the Senate.

These assholes should be forced to retire at 55 so they have to LIVE with the laws they foist on the rest of us.

In the 20th century, 320 million people died at the hands of government. Governments that disarmed their populations.
Funny that. Disarmed their people.
Mmmmmm.

Hey now wait a minute!
My government, the United States of America, is, trying, everything, it, can, to, disarm, me.

That 320 million DEAD does not include war deaths. War was the cause of death of approximately 60 million people. Nor does the deaths from police actions, riots, executions or man caused disasters like terrorism.

If you do not believe that, go ahead and look it up. It is public information published after scientific fact gathering historical records, studies, through grants paid by the US Government to professors and doctors in university's across this country.

There is an informative book titled Resistance to Tyranny in which you can discover the truth about how governments are the greatest mass murderers in human history.

now, aren't we being paranoid, tin foil hat crazy ? a government that wants to kill us ? or enslave us?
that's just crazy talk.
what they are really doing is creating utopia, it can be done, it just hasn't be done right yet.. we can DO this, if you just get rid of guns, there will be NO crime..

Good Lord, Please Deliver us from Evil, not that we deserve it. Amen.

Just off the top of my head, didn't Lee Harvey Oswald get off (at least) three shots in under ten seconds from a full-manual, bolt action (i.e. not even semi-automatic) rifle?

Given that and a bit of math, Oswald could have emptied the six-shot drop-out throw-away clip in under 20 seconds. Allowing a ridiculous 10 second to shove a new clip in, that works out to 12 rounds per minute.

Now take the 20-minute response time of the police in the CT shooting, multiply that by 12 shots per minute, and that means even a modestly skilled shooter like Oswald could have cranked out 240 rounds before police intervened.

Assume only half the shots are lethal, that still adds up to 120 dead with a full-manual single shot rifle with a six shot clip.

Now tell me again how a ban on semi-automatic weapons would have prevented the CT shooting's body count?

The blame needs to rest squarely
on the head of Adam Lanza's father
for divorcing his wife when Adam
was 16 years old. It was this act that sent the boy over the sanity cliff when the world he knew at the time became unbearable. A broken
contract, a broken home, and innocents pay the price. Isn't that always the way.
Joe Mudd