A handwritten note discovered tucked inside a Made in China Halloween kit offers some troubling -- and entirely believable -- allegations.

The note was found by Julie Keith. The emotional letter had been sitting inside the package of a K-Mart 17 ’Totally Ghoul Piece Graveyard Kit” that Ms. Keith purchased a year ago to decorate her home. She did not use it last year. However, this past Halloween, Julie decided to open the box. That’s when she discovered the folded, handwritten note wedged between styrofoam skulls and bones. 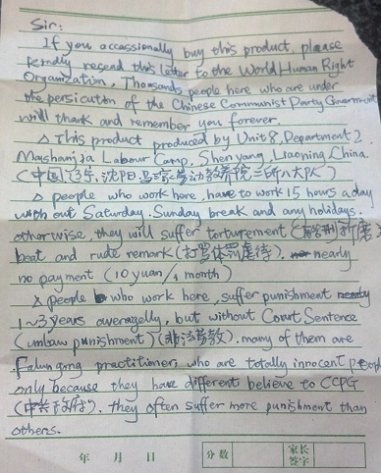 Sir: If you occasionally buy this product, please kindly resend this letter to the World Human Right Organization. Thousands people here who are under the persicution of the Chinese Communist Party Government will thank and remember you forever.

The letter continues, adding allegations of the horrible conditions under which the laborers are working;

• seven days a week (no holidays)

• For the record, China Daily reports that the average monthly salary for workers in that country ranges from 2742 to 4672 / yuan per month (or $440 to $750 per month). A salary of 10 yuan per month would be less than 5% of what the poorest regions are paying workers.

The author claims that many of the laborers are there for 1-3 years as punishment, although they were not afforded a trial. And poor work (in the eyes of the supervisors) often triggers torture and rude remarks.

There is also a charge in the unsigned letter that workers are forced to be there in retaliation for being Falun Gong members (something that is not approved by the CCPG – Central China Power Group).

While unverified, the note jibes with many other reports.

The People's Republic of China is a totalitarian slave state.

And yet it is routinely praised by the Left, from Barack Obama to The New York Times' Thomas Friedman. Which provides a perfect insight into their worldview.

This child had hope - hope that the plea would engender help.
The United States is the only Country on earth that has always championed freedom and individual liberty and we leveraged our position as a world leader/producer for results but that is changing. With an increasing percentage of our population able to write similar letters who will help us? We've become China's servant, we are enslaved by Obama's insatiable spending, we are hostages to his bi-polar foreign policy, we are forced to watch his spooning press, and we are violated in our misery by a Party that daily invents imaginative ways to torment us. They have golden parachutes to "jump" with, but we are the buffalo.
Eight years for an education, we can only hope.