Proving that the White House remains concerned about the Benghazi scandal, President Obama announced today that Amb. Susan Rice has withdrawn her name from consideration as a potential Secretary of State.

As for Quote o' the Day, Jon Gabriel wins in a landslide: 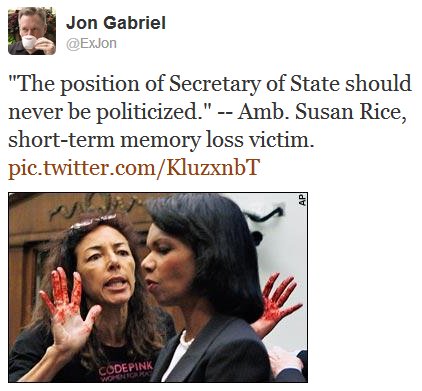 As for the reason for Rice's withdrawal?

The reason can only be fear. Next week, Hillary Clinton is supposed to testify before Congress about Libya. There are some indications Clinton may now back out, or resort to insisting on a closed session hidden from the public. Whatever the result, President Obama clearly does not want to give Congress any more high-profile chances to ask someone under oath what happened in the hours and days after Stevens was killed. Rice was at ground zero of the real scandal: not in Benghazi, where the attack occurred; but in Washington, where the cover-up was planned and executed.

Furthermore, Obama probably thought that sacrificing Rice, who still keeps her job as UN ambassador, would assuage some congressional critics and distract from a pending report on what happened in Benghazi. Most importantly, it eliminates the troubling possibility of a Rice confirmation hearing. That likely still would have led to a confirmation victory for Obama—but a pyrrhic one given the ability of most Americans to sniff out a liar.