In his zeal to pursue additional -- and provably useless -- gun control laws, Meet The Press host David Gregory waved around a high-capacity magazine last Sunday to make a rhetorical point during an interview. 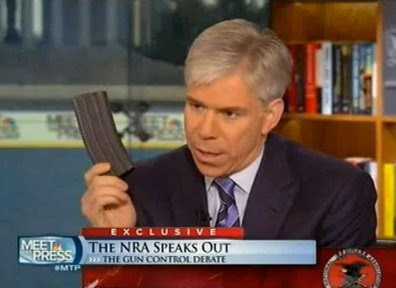 You probably know that the District of Columbia -- where the show is taped -- has some of the most restrictive gun control laws in the U.S. (and the expected high rate of violent crime... but, I digress). In fact, D.C. prohibits the possession of high-cap mags, a crime punishable by up to a year in prison and a fine of as much as $1,000.

• An enterprising blogger pointed this fact out after Meet the Press and noted that Gregory very well could be prosecuted for this crime.

• The hypocrisy is noteworthy: Gregory sends his children to a school protected by as many as 11 armed security officers, but I suspect he believes his children are more deserving of protection than yours.

• It turns out that NBC requested permission to use the mag -- and was denied. Blogger William Jacobson did the detective work and verified that the DC Metropolitan Police Department not only refused NBC's request but is now actively investigating the alleged crime.

• As you could have predicted, the entire antique media complex is running interference for Gregory:

(a) CNN's Howard Kurtz, for example, is shocked -- shocked! -- that anyone could be prosecuted for simple possession when no crime was intended. Welcome to the America in which tens of millions of law-abiding citizens live under threat of nonsensical and provably useless laws, Howie, you dunce.

But, as Jacobson points out, "One of the problems with the ever expanding gun laws advocated by Gregory and others is that otherwise law-abiding citizens get caught up inadvertently violating the law... while criminals do what they please and powerful people don’t get prosecuted." 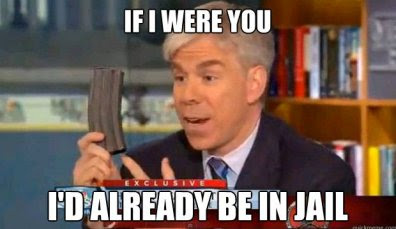 • The lurid gossip site TMZ is running interference, claiming that somehow the ATF got involved and said possession of the mag was jest fine. [Insert pregnant pause here] The ATF? Facilitating firearms crimes? Perish the thought.

• But it doesn't look like Gregory's convinced. Curiously, he's bailed out of hosting Meet the Press in DC this week, perhaps fearing a Blues Brothers-like greeting from the law enforcement community.

And it couldn't happen to a more deserving would-be tyrant. As Moe Lane observes, David Gregory can and should be arrested for violating DC's gun law.

I am perfectly serious. David Gregory needs to be arrested, for a very simple reason: if I publicly demonstrated my possession of an illegal magazine in DC then I would be arrested – which is something that I already knew very well. That David Gregory apparently did not is because David Gregory thinks that he is protected by privilege – which, as Robert Anton Wilson once reminded us, literally means ‘private law.’ The DC law is absurd and inequitable; it should be repealed. But if it is not going to be repealed then it absolutely must be enforced equitably.

DC's gun laws state that Gregory is a criminal. He should therefore be treated as one, just like you or I would be.