S*** JUST GOT REAL: The 10 Most Terrifying Economic Numbers

The modern progressive movement has no understanding -- zero comprehension -- of how bad things are going to get when the inevitable federal default occurs. Borrowing 42 cents of every dollar you spend only works for so long.

And when interest rates climb, as they inevitably will, a default on the federal debt is all but certain. After the subsequent financial reckoning, the deep blue cities that blithely support economic illiteracy will be among the hardest hit.

Tyler Durden, one of the few voices for sanity in a world headed for economic suicide, lists 75 ominous economic stats. My personal top ten: 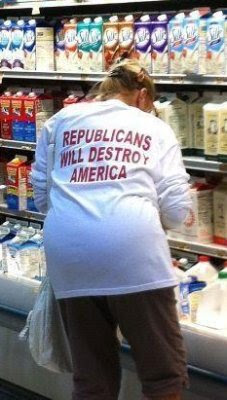 8. Median household income in the U.S. has fallen for four consecutive years. Overall, it has declined by over $4000 during that time span.

7. When you total up all working age Americans that do not have a job in America today, it comes to more than 100 million.

6. Approximately 57 percent of all children in the United States are living in homes that are either considered to be either “low income” or impoverished.

4. The average amount of time that an unemployed worker stays out of work in the United States is 40 weeks.

3. An all-time record 49 percent of all Americans live in a home where at least one person receives financial assistance from the federal government. Back in 1983, that number was less than 30 percent.

2. When you account for all government transfer payments and all forms of government employment, more than half of all Americans are now at least partially financially dependent on the government.

1. It is being projected that half of all American children will be on food stamps at least once before they turn 18 years of age.

But we're in a recovery! The people have spoken! Forward!