What could possibly go wrong with Verizon monitoring your every move inside your own home?

Verizon has filed a patent application for targeting ads to viewers based on information collected from infrared cameras and microphones that would be able to detect conversations, people, objects and even animals that are near a TV.

If the detection system determines that a couple is arguing, a service provider would be able to send an ad for marriage counseling to a TV or mobile device in the room. If the couple utters words that indicate they are cuddling, they would receive ads for "a romantic getaway vacation, a commercial for a contraceptive, a commercial for flowers," or commercials for romantic movies, Verizon states in the patent application.

For years, technology executives have discussed the possibility of using devices such as Microsoft's Xbox 360 Kinect cameras to target advertising and programming to viewers, taking advantage of the ability to determine whether an adult or child is viewing a program. But Verizon is looking at taking targeted advertising to a new level with its patent application, which is titled "Methods and Systems for Presenting an Advertisement Associated with an Ambient Action of a User."

Similar to the way Google targets ads to Gmail users based on the content of their emails, Verizon proposes scanning conversations of viewers that are within a "detection zone" near their TV, including telephone conversations. 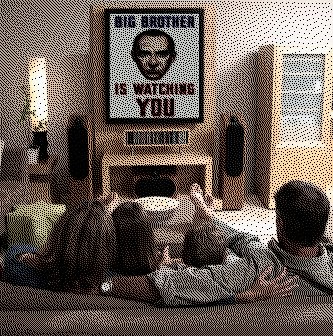 Verizon says the sensors would also be able to determine if a viewer is exercising, eating, laughing, singing, or playing a musical instrument, and target ads to viewers based on their mood. It also could use sensors to determine what type of pets or inanimate objects are in the room.

"If detection facility detects that a user is playing with a dog, advertising facility may select an advertisement associated with dogs (e.g., a dog food commercial, a flea treatment commercial, etc.)," Verizon writes in the patent application.

Several types of sensors could be linked to the targeted advertising system, including 3D imaging devices, thermographic cameras and microphones, according to the patent application...

at 11:46 AM
Email ThisBlogThis!Share to TwitterShare to FacebookShare to Pinterest
Labels: Engineering, Scitech

Uhrm, if I had to guess? Though, I don't, really. They are already monitoring you, and not just them, through every device you already own that is hooked to wireless or 3G/4G, has a camera or mic, and isn't turned off except when used... which is... pretty much every device most people have. You are already being monitored.

You... didn't realize your vehicle is already sending data to at least the manufacturer, and maybe the gov? Whoa... Silly people. No tinfoil hat needed. Get used to it. Or change things up. I haven't figured out how to sever the connection my vehicle, yet... If I haven't been working on that project yet either. The other? Keep devices off most of the time. (and no, the camera won't blinky when in their use)

I'm willing to bet not one single device on the market includes anything remotely in the spirit of Asimov's three laws.

We've got Ray Kurzweil out there telling us that all of this monitoring and interpolation is magically going to be for the betterment of everything.

You poor, deluded people: A lawyer I worked with a few years ago was fond of saying "We don't have a "Right" to privacy: Show me where "privacy" appears in the US Constitution or Bill of Rights."

And, he's right, especially now: In this Post-9/11 time, one might as well shred the 4th Amendment of the Bill of Rights, as everything's going to be argued as "reasonable".

True, true, but if you look at what the government does, you know the war is not lost. Citizens, when they get their ire up, can undo anything the government, at this point, could ever dream of doing.

While the tipping point is being positioned, it has not yet quite happened. Although with the large 'ignorance is bliss crowd'... you may be right after all. It takes a village, but not to raise a child, but to keep it's freedom. The bigger the village the better.