THE CHUCKLEHEAD FACTOR: Whatever you do, don't blame Boehner, Cantor, or LaTourette for the demise of "Plan B"

Guess who's to blame for the embarrassing failure of John Boehner's "Plan B" to avoid the fiscal cliff?

You are. The Constitutional Conservatives and the Tea Party movement that brought Boehner into power: 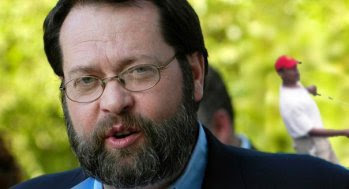 Republican Rep. Steven LaTourette said that Boehner is not to blame for the stalemate, the Tea Party is.

“I don’t know what the number is but say the number is 40 out of 240 – that’s not a repudiation of his leadership. That’s the same 40, 50 chuckleheads that all year … have screwed this place up. And he has done everything in his power to make nice to them, to bring them along, to make them feel included, but it hasn’t mattered,” he said.

It's not because of Boehner's secret negotiations with Obama, bypassing the traditional committee process in formulating a deal: 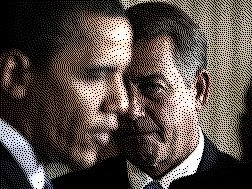 House Speaker John Boehner reportedly had another secret meeting with President Barack Obama on fiscal cliff negotiations on Monday. This is the latest in a series of behind-closed-doors talks between the two.

On Friday and over the weekend, Boehner caved on the debt ceiling and on taxes enraging conservatives while failing to delight the president enough to cut a deal...

[This] was “their third conversation in the last five days.”

It's not because Boehner jammed a secret plan down the throats of the majority without even soliciting other opinions from Republicans:

...Leadership never worked with members in crafting Plan B. "We walked into conference" on Monday, one Republican member told me, "and we were told, 'Here it is. Here's what we're going to do.' "

"I don't think they ever really gave members an opportunity to weigh in," one House chief of staff told me. One Boehner ally suggested that rather than reach out to the rank and file, Boehner used Majority Leader Eric Cantor and Budget Committee Chairman Paul Ryan as "proxies," to gauge conservative sentiment.

The conservative Republican Study Committee wanted a floor vote, during consideration of Plan B, on an amendment to permanently extend all Bush tax rates. Boehner quashed that idea...

It's not because Boehner purged fiscal conservatives from all positions of power a few weeks ago:

In a discouraging sign for conservatives hoping the GOP will stay true to the fiscally conservative Tea Party message that won in 2010, House Speaker John Boehner has reportedly removed several of Congress’s most outspoken fiscal hawks from committees dealing with fiscal matters, citing their unwillingness to be “team players.”

...With fiscal cliff negotiations at a stark impasse, this could signal that Speaker John Boehner believes he will be forced to accept a deal that contradicts fiscally conservative principles, possibly to a degree that the grassroots would see as problematic.

It's not because of an intransigent president who has no interest in negotiating in good faith.

This morning, the Wall Street Journal provides a detailed account of how the fiscal cliff talks “hit the wall.” The entire article is a must read, but one blurb really jumps out:

At one point, according to notes taken by a participant, Mr. Boehner told the president, “I put $800 billion [in tax revenue] on the table. What do I get for that?”

“You get nothing,” the president said. “I get that for free.”

We’ve said all along that President Obama’s offers on the fiscal cliff were outrageous. That may have been an understatement.

No, it's not John Boehner's fault. It's the fault of the chuckleheads.

And what chucklehead got us into this mess in the first place? Oh, that's right: John Boehner, who squandered the historic Tea Party victories in the midterm elections of 2010. He rushed into a deal without even waiting for the new Congress to assemble, as then reported by The New York Times.

In every way, John Boehner has demonstrated a complete lack of vision, will and strategic thinking when it comes to facing the true economic cliff that this country faces.

But whatever you do, don't blame Boehner. Blame the chuckleheads.

Private Message to Steven LaTourette: You're a disgrace. We have an acolyte of Saul Alinsky who is trying to destroy the economy and you're talking about a tax increase that won't do anything to address the deficit nor save this Republic. Get your nose out of Boehner's kiester and think of your country for once, you hack.

At least LaTourette already decided to resign. He really should just shut up now and go away. The media loves his criticism of the Tea Party as extremists who are causing trouble in the House, because it fits their narrative. Good riddance.

LaTourette has been my Representative.
His track record of being a moderate, is what has kept him in office, in a heavily Democrat district.
We rarely heard anything from him, unless it involved cleaning up the Great Lakes.
I find it entertaining that,his resignation explanation likens him as a child taking his ball and going home because the rules aren't to is liking.
We never heard much from him until lately with his RINO comments to the media.
Good riddance. Long live the Tea Party.

Lesson learned - the law means nothing to those who are lawless themselves, who do not have the higher Law of Truth and Love and Life inscribed in their hearts.

The GOP will be destroyed by these fanatics.