Larwyn's Linx: Let’s Have That Conversation About Guns 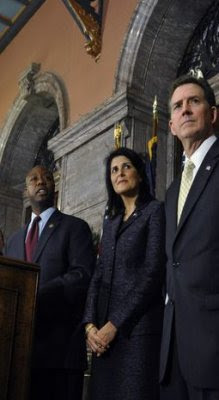 So if we're going to have that 'national conversation on guns'...: Instapundit
Gov. Nikki Haley appoints Rep. Tim Scott to DeMint’s seat: RedAlert
Mall shooter killed himself after seeing gun carrier aiming at him: Scoop

Longtime Senator From Hawaii Daniel Inouye Dead At The Age Of 88: Ace
God Suffers With Us: DLim
Why can't America care for the mentally ill?: Fox

Mark Levin: Why Obama didn’t mention Fort Hood massacre at Sandy Hook vigil...: Scoop
Clinton And Kerry Get A Free Ride From The Press: IBD
Patterico on Tommy Christopher and the ‘Wheelerization’ of Steven Crowder: RSM

Furnishing Your Tidy Little Mind: RSM
Associated Press Story: Believe It or Not Mass Killings Are Not on the Rise, They Are on the Decline: Blaze
Village Voice Winds The Dog Whistle: Slack

Europe Has Same Rate of Multiple Victim Shootings as the United States: FPM
Hope And Change: America Falls Out Of Top 10 Most Prosperous Countries For First Time: WZ
"Greece is not Japan": ZH

QOTD: "There is no system in place—at all—that routes very sick mentally ill individuals, especially those at risk for violence, to forensic psychiatry professions truly skilled to evaluate them. In any case, the numbers of such professionals are extremely low and their use largely limited to evaluating and treating those who have already committed sex crimes or very violent acts, including murder.

Clinicians in ERs and in clinics, whose resources are already stretched dangerously thin—are loathe to file the paperwork that would force hospitalization on the unwilling or force medications on individuals who need them and refuse them, if they are lucky enough to get hospital care." --Dr. Keith Ablow


The 1st amendment guarantees the freedom of the press but that isn’t an unlimited right by any means. The 1st amendment was written back in a time of printed media that traveled at the speed of a horse.

There is no way the founding fathers could have known how media technology would evolve.

These days the BSM can operate at the speed of light, with video cameras shooting at least 30 frames a second. They could not have envisioned high-capacity magazines that can shoot out reams of lies before they need to be reloaded with the next issue.

They could not have envisioned the private sale of Media outside the control of the government, private Media that could easily set off the next lunatic on a spree of carnage.

So, when is the best time to make sensible, pragmatic changes to our media law?

And I'll get us started:

We need a ban on High capacity magazines, there is no reason that Time or Newsweek to be more than 10 pages.

We need to end private sales of Media – we need the government to control who can buy media and whether they have the mental capacity to consume such media.

We should make it a felony to purchase Media for those who can't legally buy Media themselves.

We should have background check on all purveyors of Assault Journalism to close one of the major loopholes in our current Media law and make it harder for criminals and those with mental illness to engage in Assault Media.

Ensuring background checks on all Media personal would close one of the major loopholes in our current laws and make it harder for criminals and those with mental illness to gain access to Media microphones.

We should deny a Media permit for habitual offenders who have continually celebrated the murderers in these mass shooting outrages.

You can help if you have a device capable of receiving Assault Media; you need to turn it into the government right now.

We should put in place a national ban on assault journalism and have a serious review of Internet transmissions of large amounts of media.

And if the media fails to submit by these Common-sense measures We will need stricter penalties for those who refuse to abide by the provisions of the a new Assault Media Ban.

Obviously, our children, our families, our neighbours, our law enforcement officers (did I mention children yet?) deserve and expect more responsibility than talk.

Renée Pseudonym Laggard is a founding member of Citizens Against Idiotic Mayors.

The constraints on government put in place by our founding fathers either stand together – collectively if you will – or they fall together. Something you should keep in mind whilst you seek to eviscerate everyone’s right of self-defense.

We need to have a national conversation about Media control. By Renée Pseudonym Laggard

Well, its happened again – a school massacre takes place and the BSM jumps in with both left feet engaging in Assault Journalism with wall to wall coverage that glorifies the killer and encourages copycat attacks.

In their efforts to denigrate the people’s right of self-defence they promote and glorify the perpetrator, making them an instant celebrity in a world that has forgotten the difference between famous and infamous.

Perhaps we should discuss the possibility that it’s the Bull Stream Media’s fault in promoting these atrocities.

We all need to sit down and have a discussion of the role of the press in our society. Does it keep us safer? Or does it encourage more attacks putting more children in danger?

It is time to forget the politics of a free-press and instead think of the larger questions like the safety of our children.

We’re not talking about taking away the BSM’s First Amendment rights; we’re only talking about cutting the carnage brought about by Assault Journalism.