MEANWHILE, in the nation's safest city...

Chicago, Illinois must be the safest city in the U.S. because: (a) it has the most draconian gun restrictions; and (b) it resides in the state with the strictest firearm regulations in the country.

And how's that working out for them?

Shootings across the city Friday afternoon and night wounded at least ten people, according to Chicago police, including four teens in three separate South and West side attacks. 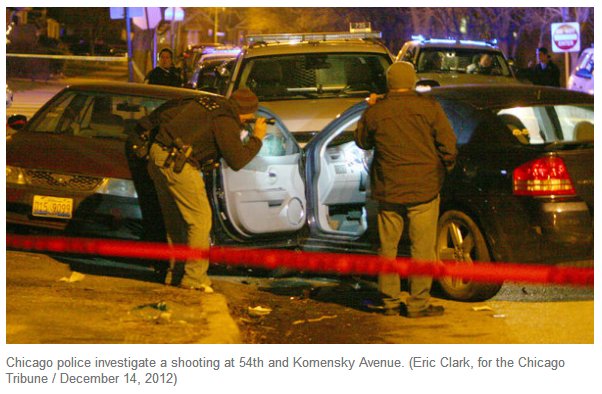 Someone shot two boys, both 16, about 5:11 p.m. Friday afternoon in the 1700 block of East 71st Place in the South Shore neighborhood on the South Side. Both were taken to Comer Children's Hospital in stable condition with gunshot wounds to their legs.

How much of the violence in Chicago that occurs each night is authored by kids without fathers?

That's the question we should be asking. Only that question won't be asked and it won't be answered, because it indicts the Democrat Party's failed policies on a monumental scale.

How many have died thanks to "the War on Drugs", "the War on Guns", and "the War on Poverty"? And how many more must die before we reverse course on the Democrats' failed welfare state policies and their catastrophic impact on the two-parent family?

at 10:29 AM
Email ThisBlogThis!Share to TwitterShare to FacebookShare to Pinterest
Labels: Crime, Democrats, Firearms, Obama, Welfare

Indeed, the focus should be on dRATS failed policies. These incidents lead one to believe there are no laws against gun ownership in these States. They need to accept responsibility for this carnage and look at the problem with fresh eyes.

What was the Republican plan to reduce gun violence? Is there a Republican plan? You are probably right that most of the kids shooing each other in Chicago are being brought up in single households. But what is your solution? You say the great society has failed them, but what plan did Republicans put forth to combat the problem. And since you believe that the gun laws in Chicago are Draconian. What do you suggest to help the situation. Have no gun laws and have everyone armed? It is easy to attack a problem like gun violence in Chicago especially when you have no idea what to do yourself.

@Anon 5:41 -
You see the bold, underlined sentence near the bottom of the post?

That's called a LINK. Click it for the answer.

Hint: stop the easy access to welfare. Stop incenting single Moms to have kids. Make it difficult to get assistance, not easy.