When it comes to software, no two words make the heart grow fonder than: (a) "tiny" and (b) "free".

A portable, full-featured audio editor that supports ASIO and VST FX in a mere 225KB download? Wavosaur is tight programming and then some. But despite its tiny footprint, this free audio editor has tons of features so you can change bit rates, convert, create and apply volume envelopes, cut, dice, slice, detect beats, normalize, and much more. 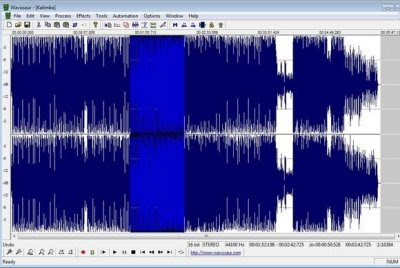 It's also very fast in applying those edits and non-destructive, which means you may undo your actions without reloading the original file.. What Wavosaur doesn't do is reverb, chorus, flange, and compress, etc. Instead, the program relies on VST effects plug-ins (Virtual Studio Technology, a standard from industry heavyweight Steinberg) for FX. That's no doubt part of the reason it's so efficiently-sized. You can find download links and listings of many free VST effects plug-ins on the Wavosaur website if you've none of your own.

Though somewhat Windows 95 in appearance, Wavosaur is extremely easy to use, fast, and efficient. Don't let shape-consciousness deter you... The Wavosaur interface is efficient, though a bit old-school in appearance. You can dock the numerous toolbars at the top or bottom of the editor window or detach them to float. It isn’t particularly pretty, but it gets the job done quite nicely.

Wavosaur is impressive, and for straight audio editing, it's amazingly powerful. Download it, even if it's just to see how small you can go when you write tight code.

If you do any audio work, PC World has the details and a download link.