ANYONE CAN BE A GUN-MAKER: "Regulation or banning of firearms... will soon be impossible"

Innovations in 3D printing will soon make any sort of ban on firearms pointless. 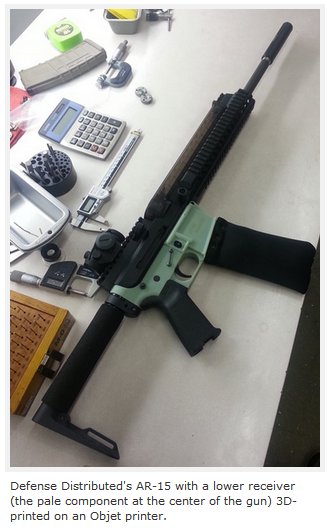 Three months ago, the gunsmiths behind the group known as Defense Distributed announced their intention to create a working, lethal gun anyone can download and 3D-print at home. Now their experiments with actual 3D-printed firearm components and live ammunition have started. And they’re documenting their progress on video.

Over the weekend the project’s founder Cody Wilson posted a YouTube clip of the group testing an AR-15 semi-automatic weapon Defense Distributed assembled with a 3D-printed lower receiver, the highly-regulated component that serves as the body of the gun onto which the barrel, stock, magazine and other elements are attached...

...A lower receiver has special significance to gun enthusiasts: It’s the central part of the weapon that’s regulated by gun control laws and trackable by serial number. Print your own lower-receiver at home, and in many states all the other parts can be obtained without background checks or even identification.

If we as a country, and indeed we as a global community, are going to seriously address the question of gun control, we need to address the issue of fabricated weapons and weapon plans, or else the discussion will be moot. This is because the proliferation of 3D printed weaponry changes both the definition of “gun” and of what it means to “control” it... 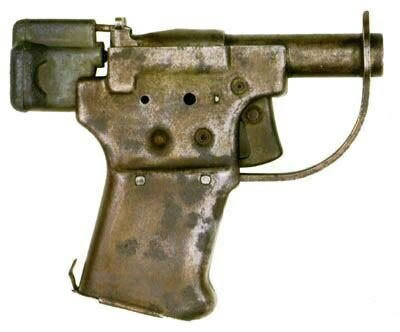 ...In World War II, the U.S. manufactured one million FP-45 Liberator handguns. These crude, single-shot pistols were designed to be dropped from the air by the thousand over occupied territory, to give the resistance there the advantage of a firearm, be it only for one shot. The fundamental difference was not between six shots and a hundred shots, but between zero shots and any shots at all.

A 3D-printed gun, were it only to fire one shot before melting or failing, is still a gun. After that, the difference is only in what kind of gun it is.

Of course printed guns don’t and won’t constitute the major part of the ideas in such a major and divisive debate as gun control. But that does not obviate the fact that we can print guns. We can do so today, and the ability to do so is only improving. It is very important to note that one need not take a side in the debate to acknowledge this. And it is very important that we acknowledge this now, so that we are not forced to acknowledge it later, when it will be too late to take either side...

Part of the discussion has to be that, government or otherwise, there can be no more control over printed guns than there can be over printed spoons. Regulation or banning of firearms, whether you think the idea is good or bad, will soon be impossible.

What this means is that criminals will soon have easy access to firearms no matter what politicians and governments decide.

Control of the news media.
75% complete

And, of course, an unarmed population.
Initiated, proceed with ramp up

you can download blueprints and CNC programs to machine an AR lower receiver already, you can also buy 80% complete machined lower receiver blanks without an FFL transfer as well.

Hey Doug Ross
why is this comment scenario
so screwed up? it's easier to
buy an AR15 lower than it is
to comment on your site. and
what about commenting on comments?
Somebody all jacked up this site.

Hey, Ben - what browser and OS are you using?

Haven't heard any complaints before this.

> What this means is that criminals will soon have easy access to firearms no matter what politicians and governments decide.

Is "right now" soon? They already do.

3D Printing is still in its infancy. As more materials are added to the 3D printing process, and 3D printing matures, this new Star Trek replicator will be able to create almost any 3D model in almost any material (that can be melted into "ink". I have a few stories on 3D printing myself, I've been watching this exciting technology for quite a while now.