"Anthony Weiner Is A Sexual Predator Luring His Victims"

My source is solid. She really thought Anthony Weiner and her were in love, they spoke on the phone daily multiple times a day for 6 months. Anthony Weiner played with her emotions and mind. Most calls were phone sex. He promised her many things including a condo in Chicago (1235 S. Prairie Ave) where they were planning to meet up to have sex. Anthony Weiner has a shoe fetish, particularly heels. 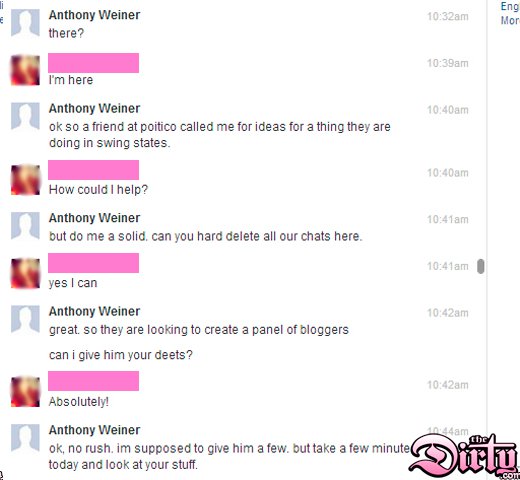 I know my source wasn’t the only girl he lured online (poked). Ladies if you exchanged sexual pictures with Anthony Weiner aka Carlos Danger please come forward.

Anthony Weiner is one very sick individual. These exchanges are said to have occurred after his first lewd photo scandal had cost him his job in Congress and nearly his marriage.

It's saying something that Democrat Ted Kennedy killed a woman, Democrat Barney Frank had a homosexual brothel operating out of his residence, Democrat Gerry Studds admitted to buggering underage pages, and Democrat Bill Clinton had a series of women accuse of him sexual battery -- and none lost their jobs as a result. So Weiner has that going for him.

Also: Eagle-eyed blogger Peter Ingemi noticed the Politico reference in the messages and started inquiring: is it typical for Democrats to offer gigs at Politico as a reward for favors?

Try and contain your shock.

This guy is a real project.How many voting for him would want him dating their daughter?

Sexual perversion seems to have become a badge of honor among liberal Democrats, and Tweeting your privates around, cheating on your wife, and putting parts of your body in disgusting places that they don't really belong is now apparently a rite of passage into the Democrat Party. Someone really should do a study to find out why that is.

I suspect it's because a growing majority of their constituents are behaving in the same way, and liberal politicians think they will feel much more comfortable electing politicians who share their damaged moral compasses.

Birds of a feather flock together I suppose...

If his wife admits that it has taken a lot of "hard work" and a "lot of therapy" for her to save their marriage, what can Joe Public expect with this man servicing their interests?

Don't forget, Humma has been to the Hitlery Rodham Graduate School for Girls.
Courses:
Find a man.
Stand by him.
Ride him into Office.
At any cost.
Then you go girl, live your dreams.


Anthony will be the next Mayor of NYC. I'd bet on it.