Lindsey Graham, along with John McCain and Marco Rubio, were the primary co-conspirators with malevolent Statists like Chuck Schumer and Robert ("Hey, little girl!") Menendez in crafting the latest Amnesty bill. And some of his constituents are more than a little peeved.

The sign, posted in Canton, Ga., declares: “South Carolina welcomes the undocumented. Sen. Lindsey Graham says his state has a labor shortage and wants more immigrants. For job tips, call his office at (864) 646-4090. Located in Pendleton, S.C. Only 2 hours from Atlanta!” 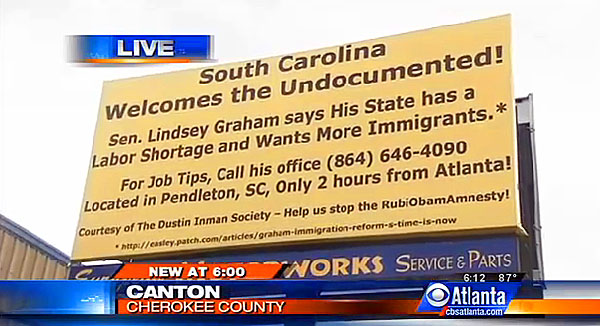 “These people must have been off the planet for the last five years,” said D.A. King, an immigration activist... “We don’t need more workers. We need more jobs.”

Isn't it amazing that 20 million people who stole into this country illegally are honored and catered to while the hundreds of millions citizens who pay the bills are ignored and tormented?

Vote out Graham, Boehner, Rubio and the rest of the Democrats in Republican clothing....and all Obama Thugs and Racists.

Let's get some honest public servants with common sense, who don't see skin color or cater to their cronies first.

I couldn't believe he won re-election last time. They need to clear his calendar.

Linked. We have a candidate to run against Graham in the primary. Richard Cash is running against Graham, but he could use some help.

Yo, Mike - how about a link and/or a backgrounder on Richard Cash?

Boehner ran unopposed in 2012. Not even the Dems ran a candidate against him, much less the Tea Party. He's safe to keep being a douche.