Detroit and those evil Republican S.O.B.s

Second City Cop is an excellent police blog centered around the creaking, failed Democrat political machine in Chicago and its ramifications for police work. The Chicago scene is its primary -- but not exclusive -- focus. SCC also features previews of Chicago's coming attractions, like Detroit's economic collapse:


We were just reminiscing about the past. A little over a year ago, Mitt Romney said to let Detroit go bankrupt, that a complete financial overhaul of the city, its corrupt practices and restructuring of debt was probably the best route for the beleaguered city. He was speaking as a businessman would with a company that was bleeding money. Remember all the democrats and media making fun of him for actually considering a city the size of Detroit could (or should) fail?  Silly Mormon businessman.

In a completely unrelated story, we just heard that following an eleventh hour appeal to the Obama administration, Detroit filed for bankruptcy on Thursday, placing the city residents, its employees, its retirees and its creditors in financial limbo: 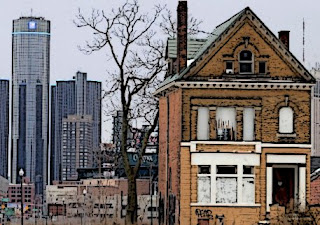 Here's another article that tells you exactly what went wrong:
But hey, those Republicans are evil sons-of-bitches, aren't they?

Good job getting Kilpatrick's mug in there. It wasn't just the unions and contracts and size of government. The graft was immense. Between the Kilpatricks and the Conyers families alone ther siphoning of funds from the city was incredible. Imagine the crime bosses, too, and you get staggering sums of money evaporating from the city coffers.

By the way, check out Crowder's latest vid on Detroit. It's very well done. (on his youtube "channel").

Government Pension recipients can save their money and enjoy what's left of social security like the rest of us.

Now we need to gut Congressional pensions. All those A-holes are millionaires and the taxpayer should not have to contribute to supporting these criminals after they leave office.

So $6B of the unfunded liability is for retiree medical benefits. Many of these city workers were devoted civil servants working to keep the city together in spite of the corruption at the top.

Even as a stone-hearted Republican, I could see a compromise where these retirees could get on Medicare even though they probably have never contributed to it. This would take an Act of Congress and would set a bad precedent for other cities. Current employees and the city would have to start paying Medicare payroll taxes immediately.

As a fall-back, they could get Medicaid.