Mark Levin Transcript: It Would Appear That Boehner "Cut Some Kind Of Deal With Obama" On Benghazi

The peerless Mark Levin weighs in on the weakest House Speaker in decades:

You know, ladies and gentlemen, I hate to say this, but it's right in front of our faces. Obviously, John Boehner does not want to get to the bottom of what took place in Benghazi. It's obvious. He's been asked over and over again by a majority of the Republicans in the House to set up a special investigative committee as is the tradition in these types of investigations. So you concentrate expertise and resources and time in one special committee rather than multiple committees that are also investigating other matters and overseeing other matters and handling bills and so forth. 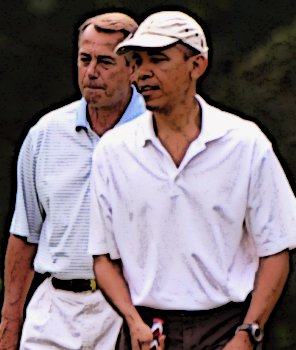 So, it's as if the Speaker of the House, the Republican Speaker of the House, doesn't want to get to the bottom of this. And I suppose his brain trust, Eric Cantor -- by the way, Eric Cantor is on this "Lecture America Tour" about why illegal immigration is a wonderful thing for this country. Is he stopping in anybody's neighborhood? I haven't heard anything about it, have you Mr. Producer? He such a voice out there -- in the wilderness, where he belongs. But, anyway, it's obvious at this point, ladies and gentlemen, that we have to draw a very sad conclusion: John Boehner does not want to know what took place in Benghazi on that horrific day. And I'm honestly starting to think that he's cut some kind of deal with Obama, because why else would he do this?

Obama has never answered for approximately eight-and-a-half hours of inaction, and I contend that he went to sleep. He's never answered for this. And it goes on and it goes on. It's preposterous that we can't find out from the president of the United States, the Commander in Chief, whose going to be running all around the country lecturing us, telling us why our economic system sucks, why we should replace it with a top-down tyrannical-type of economic system, why we have to listen to his spokesidiot, this guy Carney, dismiss any serious questions that are asked. I mean, what the hell is this? Is this a joke? I feel like we're living through a nightmare here.

So the greatest secret on the planet right now is what Obama was doing during eight-and-a-half hours when our consulate was under attack, our ambassador being slaughtered, two ex-SEALs coming to his rescue being slaughtered, and the security/information individual, gentlemen, being slaughtered. And we can't get an answer. And John Boehner doesn't want an answer, because John Boehner is what stands between setting up a special investigative committee and not.

And God bless this Frank Wolf from Virginia who will not take 'no' for an answer. He just continues to press and press and press, and Wolf is not some kind of rebel. He wants to get to the bottom of this. And why should this be partisan? Why should it be political? And why the hell should the Republican Speaker of the House obstruct the investigation? So the time for mincing words -- not that I do, but others do -- the time for mincing words is over.

John Boehner does not want to get to what's going on in Benghazi, or what took place, and he simply doesn't give a damn. And he's very, very busy, ladies and gentlemen, scheming in the shadows trying to figure out how to give tens of millions of illegal aliens a 'pathway to citizenship' so that they can vote 8-to-1 Democrat. This is the kind of insanity that we're dealing with. And believe me, it is insanity.

What can we do about Boehner? Well, here's one proposal.

If this is true Boehner needs to be fired.