Now, if the House of Representatives was actually serious about the Obama administration's serial perjurious testimony, it might actually do something drastic. Like defund Obamacare and kill any talk of Amnesty. But I'm guessing that, despite this report, nothing at all will change.

House Republicans released a report Wednesday and “formally accused” Attorney General Eric Holder of misleading Congress with his “deceptive” testimony back in May, Fox News reported. 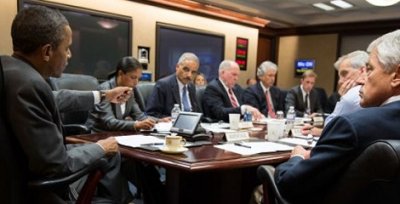 After reporting their findings, lawmakers sent a letter to President Obama saying they have “grave concerns” about Holder and called for a “change in leadership” at the Department of Justice.

Holder, testifying before the Judiciary Committee on May 15 on DOJ leaks investigations, said he “knew nothing” about the “potential prosecution” of Fox News reporter James Rosen, when actually, it was reported later, Holder himself approved the warrant for Rosen’s email communications.

“With regard to potential prosecution of the press for the disclosure of material, that is not something that I have ever been involved, heard of, or would think would be a wise policy,” Holder then testified to the Judiciary Committee.

However, a House committee investigation concluded Holder’s testimony was “deceptive and misleading.”

Translation: Holder lied under oath, which -- last I checked -- was a crime.

I'll believe the House is serious when they act serious. Schmucks.

Obama laughed, folded the letter, and used it for a coffee cup coaster. "Tell me another one" he said to an aide.

The House Republican leadership issued another letter which protested Mr. Obama's actions "in the strongest possible terms". Gossip suggests that more letters are on the way.

House Republicans are considering a new position, Ambassador to the Executive Branch, which will handle such diplomatic niceties in the future. They can then "withdraw" their ambassador should the President refuse their future requests.

The corrupt and pathetic John Boehner is our #1 problem, not Obama or the corrupt agents he has infested our government with -- those pests can be exterminated by the House. But not by a mouse.

Dump Boehner and we'll see some real change, and perhaps have hope for our future.

I'm sh0-0cked! Holder lied? Which time is this report referring too. He has been lying his @zz off ever since he was El-Reno's deputy. He wasn't held accountable then, and he's not going to held accountable now.

Besides, there would be a konga line of administration officials who have committed perjury. The repubics aren't the slightest bit interested in holding anyone accountable. "Go along, to Get along".

"At this point, what difference does it make". hrc