Well, if there was ever any doubt what President Obama meant by "fundamentally transforming" our nation, this should put it to rest. Now 101 million -- one third of our population -- is on federal food aid of some sort. And it's not like Americans would go hungry either as 35.9% of adults age 20 and over are obese. We now have more people on food aid than are working in the private sector, and only 47% of working-age Americans have full-time jobs. 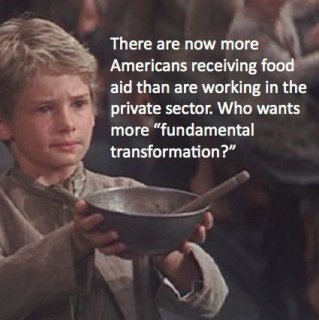 The number of Americans receiving subsidized food assistance from the federal government has risen to 101 million, representing roughly a third of the U.S. population.

The U.S. Department of Agriculture estimates that a total of 101,000,000 people currently participate in at least one of the 15 food programs offered by the agency, at a cost of $114 billion in fiscal year 2012.

That means the number of Americans receiving food assistance has surpassed the number of full-time private sector workers in the U.S...

...A “potential for overlap” exists with the many food programs offered by the USDA, allowing participants to have more than their daily food needs subsidized completely by the federal government.

According to a July 3 audit by the Inspector General, the USDA’s Food Nutrition Service (FNS) “may be duplicating its efforts by providing participants total benefits in excess of 100 percent of daily nutritional needs when households and/or individuals participate in more than one FNS program simultaneously.”

Food assistance programs are designed to be a “safety net,” the IG said.

“With the growing rate of food insecurity among U.S. households and significant pressures on the Federal budget, it is important to understand how food assistance programs complement one another as a safety net, and how services from these 15 individual programs may be inefficient, due to overlap and duplication,” the audit said.

Where are the leaders who will step forward to reverse this trend?