SKIN IN THE GAME: Obama Will Veto Defense Appropriations Bill Unless Health Premiums for Vets are Hiked 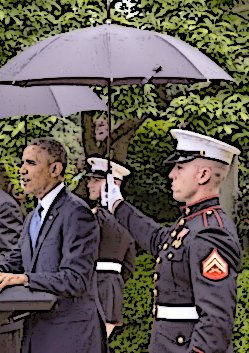 Politics: A veto of the defense authorization bill is threatened unless the president gets his way. He wants health care insurance premiums and co-pays increased for troops and scheduled military pay raises to be reduced.

Being used as photo-ops for presidential speeches and willing to make the ultimate sacrifice for your country apparently does not exempt our troops from the rising health care premiums that President Obama said, along with sea levels, would not rise under his administration. The next time a soldier hears "give me 50," it might be dollars and not push-ups.

The White House has threatened to veto the 2014 Defense Appropriations Act in part because it does not increase premiums and co-pays associated with Tricare, the Pentagon's in-house health system, and because it proposes a 1.8% pay increase instead of the 1% the administration demands.

Tricare, according to its website, "is the health care program serving Uniformed Service members, retirees and their families worldwide." As the administration pushes for higher health care costs for military personnel, the benefits of unionized civilian defense workers remain unscathed.

As the Navy Times reports, the president's proposal includes a freeze for 2014 for Medicare-eligible retirees in the Tricare for Life program; but there would be rapid increases over the following years, with annual hikes of $150 in maximum fees for most retirees and $200 for flag officers. For flag and general officers, annual enrollment fees for family coverage would be $900 in 2014, then more than double to $1,840 in 2018.

The 1.8% pay increase is the percentage that would be required in order for military pay to keep pace with average private-sector wage growth. The administration's proposed smaller increase would be the first military raise in more than a decade that failed to keep pace with the private sector.

"We shouldn't ask our military to pay our bills when we aren't willing to impose a similar hardship on the rest of the population," Rep. Buck McKeon, R-Calif., chairman of the House Armed Services Committee, told the Washington Free Beacon after an earlier round of Tricare cost increases. "We can't keep asking those who have given so much to give that much more."

The White House statement threatening a veto reads: "The projected FY 2014 TRICARE savings of $902 million and $9.3 billion through FY 2018 are essential for DOD to successfully address rising personnel costs."

Yet in 2012 it was revealed that Tricare was running a $708 million surplus. Instead of leaving the money where it was, the Department of Defense sought to transfer the surplus to other programs.

Some critics believe that as with private sector insurance, this is an administration attempt to increase costs and force military personnel and retirees out of the Tricare system and into ObamaCare's insurance exchanges.

"When they (administration officials) talked to us, they did mention the option of health care exchanges under ObamaCare. So it's in their mind," a congressional aide involved in the issue told the Beacon.

For those who have served their country in uniform, the country owes them a great debt. Their commander in chief seemingly wants to put them deeper in debt. At the American Legion convention in August 2011, Obama said that "we cannot, we must not and we will not balance the budget on the backs of veterans."

Yet the administration's proposed Tricare increases and pay proposal is just that, an attempt to balance the budget on the backs of our veterans.

Bullshite - have you been given early access to the 2014 FEPBlue charts? I think not. No link, just digital gotcha vomited out to rouse the conservative lofos. Since GS/WG defense workers are used to seeing premium increases over the years (unlike your state and local cronies), I can only imagine the whack in store for us. The "keep your 26 year old 'child' on your policy" was a noticeable hike. Would you like the charts to prove it? Dude, just shut up, most of my coworkers are ex active duty, so you are bashing vets along with the "union" boogie men living in DC. I am not complaining, it is a good job in a tough economy, and yes, the taxpayers are the providers that make it happen. I don't whine about the furloughs either - stuff happens. Just know that active duty keeps a large chunk of their pay "off the books" which is why they can qualify for SNAP, etc. *Nobody* is hurting like the private sector, and if Obama wasn't such an incompetent a$s, I would give him a pass on this tweak. You can do math, right?

I used to be a well-meaning but idiotic pacifist peace activist. I hated -- loathed, despised and had nothing but contempt for -- the military and everyone in it.

Thanks be to God, I eventually GREW UP. But Barack Obama has never grown up. He abhors the military and especially, traditional military culture. He's getting more and more brazen and not even trying to hide it anymore.

In the years before he achieved high office, he proclaimed his desire to disassemble the U.S. military. Unfortunately, very few people paid attention. Had they done so, they would not be surprised that he is now doing everything in his power to de-fund and demoralize our military and spit in its members' faces.