Except, of course, those who live in the real world:

A man who allegedly killed his 13-year-old half-sister survived a fusillade of bullets from New York City police officers early Tuesday, after pointing his pistol at officers. 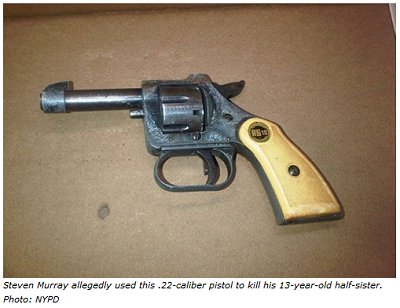 Steven Murray, 28, had allegedly shot his mother Christine Fryar, 44, and her daughter Annie, according to the NYPD. Paramedics arrived to find the daughter dead with a gunshot wound to the head. The mother, who was also shot in the head, was transported to Harlem Hospital, and is listed in critical condition.

Police eventually confronted Murray, who was running through the surrounding neighborhood. The officers pursued Murray on foot and returned fire after he fired one shot.

Murray has been charged with murder and attempted murder.

Shhh: no one tell the would-be tyrant Andrew "Architect of Ruin" Cuomo.

Gee....you mean, unlike Hollyweird, just one from-the-hip shot at a perp 100 yards away doesn't spin him around six times and immediately drop him to the ground?

Quick, someone tell ol' Two-Barrel (and two-synapse) Biden about how many bullets it might take in the Real Universe.

I think the NYPD better re-think the NY-1 trigger. That and more range time for the troops.

Hope the 'collateral' damage wasn't too bad!!! Those officers need some serious training!!

Gee!The cops fired how many rounds?Hit the perp 14 times? what did they use? a water pistol/Proves You need more then 10 rounds sometimes

Shot 14 times means they were using a 9mm, no knock down power. If they'd been using a .45 ACP, one round usually suffice to subdue a bad guy. The late Elmer Keith, Mr. 44 said that long ago.

Where O" where did the other 70 bullits go? Several houses were shot up by the POLICE. If A bullit comes thru my house I WILL RETURN FIRE!

After my last visit to the shooting range, I am confidant that if I am ever attacked by a blue man who stands motionless 25 yards away, I can defend myself.

This article speaks to the need for better marksmanship training for NYPD more than it argues for larger magazines. Maybe it's time to limit the cops to 10 rounds to lessen the danger to civilians!

We are taught in CCW classes that every bullet has a lawyer attached to it. Apparently NYPD has the cash to pay off people (and the bureaucracy to discourage lawsuits).