COLOR ME SHOCKED: Karl Rove Either Lying or Ignorant About How Obamacare Can Be De-Funded

And to think that the guy who won a tidy one point eight percent of his races in 2012 could be completely off-base on such a critical issue. Dean Clancy explains:

Karl Rove Gets It Wrong on ObamaCare Defunding

Karl Rove has a piece at FoxNews titled "Republicans must resist game of chicken with president over ObamaCare." In it, the establishment's favorite political guru dispenses bad advice to grassroots conservatives, based on the assumption that defunding the health care law on a spending bill "won't work." 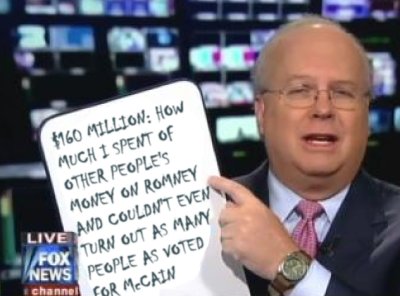 That would be a valid argument, if its basic premise were true. But it isn't. What the "Don't Fund It" coalition (led by Senators Mike Lee, Ted Cruz, Rand Paul, and others) is proposing is that all ObamaCare funding -- including auto-pilot spending -- be cut off by means of a legislative "rider" containing specific prohibitory language forbidding any ObamaCare funding from occurring. This rider would be attached to the CR, widely regarded as a "must-pass" measure...

...This language is clear and comprehensive. Enacting it would bring ObamaCare to a complete and permanent halt...

Karl Rove is a nitwit whose ignorance is only exceeded by the tools who continue to put funds in his chubby little fingers. His "Crony Capitalist Republicanism" wasn't popular in the Bush era and it is certainly even less popular now.

He has no earthly idea how much energy the Republican Party would garner from the grassroots by taking a stand and actually fighting on principle, win or lose.

Rush stated it cogently today. This isn't just about defeating Obamacare. It is about taking a principled stand against the government takeover of healthcare and distinguishing the Party from the Democrats. Republicans appear feckless when they argue how terrible Obamacare is for us and the nation but then fail to do what they can to stop it.

But Karl and Ed Gillespie and that whole crowd of graverobbers in D.C. are getting gobs of cash from HCA, the Plaintiff's Bar, and Big Pharma, who are now fully invested in this tinpot Banana Republic ripoff of NHS.

With Karl, you always have to follow the money.

Ted Cruz and Palin were right all along. Send Obamacare to hell.

Republican brand is damaged. They need to get to back the roots that made this country the best in the world. The moment they support incumbent protection policy the country nose dives to third world region. The RINO's should be shunned like lepers. Karl rove should leave the scene and watch the sun setting.

As an old white guy that has been around for a long time and seen what works and what does not, it seems abundantly clear that Rove, McCain and those of their ilk need to shut the hell up and go away. They are helping the Democrats destroy this country.

Message to Karl....your village is looking for its idiot....you. We need more men in congress like Sen. Lee who believe and act on principle and belief.