...with some amazing, original reporting on the tragic KAL airliner crash: 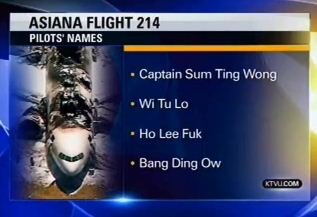 On today’s Noon newscast on KTVU, the station claimed it had “just learned the names of the 4 pilots on board” Asiana flight 214 which crashed last Saturday. But the station was given bad information that made it all the way into the newscast. If you read the names it becomes immediately clear this is a joke, which went unnoticed by the newsroom, producers and the anchor.

You’ll recall earlier this week, KTVU touted its coverage as being not only first, but “100% accurate.”

“Being first on air and on every platform in all aspects of our coverage was a great accomplishment, but being 100% accurate, effectively using our great sources and social media without putting a single piece of erroneous information on our air, is what we are most proud of as a newsroom,” said News Director Lee Rosenthal at the time...

at 11:19 PM
Email ThisBlogThis!Share to TwitterShare to FacebookShare to Pinterest
Labels: MSM

I heard the female newsreader saying the list of names while listening to the radio and drinking a coke and it came out my nose.

Beautiful! Zero is in the news again. By proxy? Whatever. Way too funny.

Funniest thing? The names are in the correct chronological order!

This does prove, that even when they are not actively corrupt, the people working in the 'news' media could not care less about the truth of what is spoon fed them.