99 percent of you have no earthly idea who or what a Doug Mataconis is (if that actually is his real name). Nor should any of you care, other than the fact that his website is home to dozens, if not hundreds, of woefully confused progressives. In his latest excretion, Mataconis takes Ted Cruz and fellow conservatives to task for daring to fight Obamacare.

Cruz’s advice requires anyone who follows it to ignore political reality to a significant degree. For one thing, 2013 is not 1995, and the Republican Party, especially in its Congressional incarnation, is not viewed nearly as positively today as it was nearly 20 years ago. 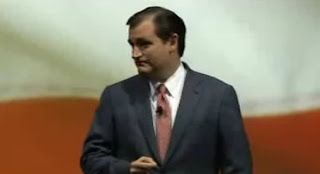 Gee, Doug, ya think it has anything to do with the fact that the Republican Party in its current state stands for absolutely nothing? Tell me, Doug, what does it stand for? Lower taxes? No. Secure borders? No. Investigating the Obama administration's unprecedented series of scandals? No.

Of course the Republican Party is unpopular. It spends its energy fighting the same conservative base that brought it to power in 2010 in an unprecedented beatdown of Democrats nationwide rather than the Marxist Left that is Cloward-Pivenizing the country into bankruptcy. And instead of embracing fiscal conservatism, the Tea Party, and First Principles, it repudiates them.

Its marble-mouthed "leaders" like John Boehner and Mitch McConnell have all the charisma of your average houseplant.

So, Sherlock Mataconis, if you're looking for reasons that the GOP is unpopular, perhaps you could add one (the far left Democrat kook movement) and one (the conservative base) and you'll come up with two (the answer).

More importantly, though, Cruz is making the same mistake that Republicans made in 1995, and which they have made several times already in the four years that President Obama has been President. He believes that by taking the Federal Government to the brink, they can somehow turn the tables and make the public believe that it’s President Obama who’s at fault for the fact that the Government has been, or is about to be shut down. They tried in in the Spring of 2011 when the government was about to run out of money, they tried it in July and August of that year with the battle over the debt ceiling, and they’ve tried it several times since then.

How many shutdowns did the Republicans pull off? Oh, that's right: none. So comparing a shutdown to a Boehner surrender is like comparing monkeys to cashews.

Let me get this straight: the GOP passes a CR that funds the entire government except for the wildly unpopular and destructive Obamacare cluster -- and Obama blocks it, shutting down the government.

Who do you think gets the blame? Oh, that's right: Mataconis thinks Ted Cruz will.

In reality, the GOP will be viewed as heroes by roughly 60 percent of the electorate.

Best of all, Obama will be on the hook for actually making a decision: (a) either shutting down the cancerous federal leviathan that grows in good times and bad; or (b) funding the federal government and starving Obamacare.

So if you're relying on Doug Mataconis for political advice, I'd recommend using a Ouija Board instead. It's bound to offer more reliable counsel and it has a better chance of outwitting Ted Cruz than Doug ever had.

It won't work, not matter how much you daydreamers want it to. Obama has nothing to lose if the USG closes down since he is not up for reelection. GOP had its best shot last November and look what happened.

I totally agree with your politics. But when you say: "Let me get this straight: the GOP passes a CR that funds the entire government except for the wildly unpopular and destructive Obamacare cluster -- and Obama blocks it, shutting down the government.

Who do you think gets the blame? Oh, that's right: Mataconis thinks Ted Cruz will.

In reality, the GOP will be viewed as heroes by roughly 60 percent of the electorate." you've missed the boat.

Here's why; 45-49% will react just as you state, NOT 60% and that difference is critical. Upon what do I base that claim? The 2012 election. Lay responsibility upon a seditious media, academia, dishonest democrats, blind, deaf and dumb liberals... of whatever combination you wish.

If the government shuts down, the media will completely ignore the facts and Obama's responsibility, and lay it all upon the Republican's heads, just as they did with the sequester. Hell, the sequester was Obama's idea, which he pushed for...and it didn't matter a bit. Boehner didn't push it because fior all his faults, he's right in his read on what the 2012 results reveal about the political lay of the land.

Obama, for all his manifest faults, has his eye firmly on the ball. ALL that counts is regaining a democratic majority in the House. He doesn't care what the truth of the matter is nor how dishonest his position. ALL that counts is whether he, the dems and the MSM can sell their narrative. And 2012 proves that they can.

Where does that leave us? Up the proverbial creek without a paddle.

Mataconis calls himself a 'libertarian' on his Twitter profile