"But with this endless parade of distractions and political posturing and phony scandals, Washington has taken its eye off the ball. And I am here to say this needs to stop. (Applause.) This needs to stop."

10. Someone pleads the Fifth. Lois Lerner, IRS Director of Exempt Organizations, invoked her Fifth Amendment right against self-incrimination during an oversight hearing. She was also suspended (with pay). 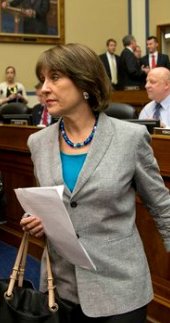 8. You announce drastic policy shifts to minimize damage. When the Department of Justice was found to be snooping on the AP and Fox's James Rosen, Obama suddenly embraced a media shield law.

7. You make a show of "forcing" an official to resign. Obama theatrically announced the resignation of IRS chief Steven Miller; though his term was almost over, the gesture sent a clear signal of disapproval.

6. You try to arrest a low-level leaker. Though Obama himself minimizes the effort to catch Edward Snowden, the federal government is desperately trying to have him extradited for exposing NSA programs.

4. You intimidate whistleblowers. Hillary Clinton's State Department intimidated officials who knew the truth of what happened in Benghazi--and others who knew about gross misconduct in the agency.

3. Your Department of Justice opens criminal investigations. Theoretically, anyway, Attorney General Holder is seeing to it that the IRS's conduct is being scrutinized for alleged federal crimes.

2. You yourself have condemned the misconduct. Whether calling the IRS's behavior "inexcusable," or condemning civil liberties violations before 2008, Obama set the standard by which he is being judged.

1. Even the friendly media have run out of patience. When even journalists who made sure Obama was elected--twice--begin to feel threatened and irritated by the administration, there is no denying reality.

"The lady doth protest too much, methinks."

An, as usual, he's full of excrement.

What a horror this pathetic, malignant clown is.

I noticed that the highlighted words in this post are BARELY a different color than the rest of the text. I can barely see them. Please consider making them stand out more. Thanks!