Charles Payne: "President Obama would love to see civil unrest in this country very much like the Arab Spring"

In his eighth and most recent pivot to the economy, President Obama has begun channeling Saul Alinsky as though he's participating in a seance with the late Communist rabble-rouser. His rambling, 80-minute long, Castro-like speeches have increasingly revealed an inner anger with America (as noted by White House correspondent Keith Koffler).

Stuart Varney: Obama used the term "inequality" more than he used the word "growth". And this is a problem, according to Charles Payne.

Charles Payne: It is a problem. He talked about [income inequality] being morally wrong. You know, Stuart, if you and I entered this building and there were different rules for each of us, that would be morally wrong. But if I dropped out of high school and smoked weed all day and you worked your way through college and made more money than I did, that's not inequality, that's just. 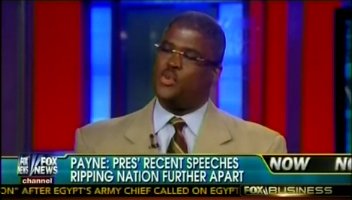 Here's what this president did: he tried to condemn capitalism. He tried to condemn success. He promotes mediocrity. And he's making excuses for people to fail in this country, instead of being honest about it.

The bottom line is this: the president is pushing this agenda. That America is somehow a mean-spirited country without opportunity and we're going backwards. When, in fact, every single year we get closer to that "more perfect union" that we strive for.

In my mind -- and I hate to say this -- I think President Obama would love to see civil unrest in this country very much like the Arab Spring. I think what he's trying to do is to spark this revolution against the wealthy, against the "One Percent" who are holding us back, who are hoarding this money,

You know Democrats are trotting out this statistic about how much money the top one percent controlled in 1979 versus how much they control now. Well, it's quadrupled, as if it's the same group of people who've been greedy with money and greedy with opportunity.

One of Obama's heroes was a man named Saul Alinsky. Community organizing got its start in Chicago under the direction of Alinsky, an avowed Marxist. Alinsky believed that poverty was the result of political inequalities.

What isn't widely known is that Alinsky also envisioned a power-grab by the "have-nots" of society, who would form massive, grassroots coalitions that would defeat the rich and redistribute their possessions.

An NBC News/Wall Street Journal poll released earlier this week revealed that "since January 2009, people’s opinion of race relations in this country has plummeted by 25 percentage points". Barack Obama and Eric Holder -- and their politicization of a single case in Florida involving a Hispanic and a Black -- have done their level best to foment anxiety.

If Payne is right, we are witnessing a modern-day Alinsky set the stage for civil unrest.

Great article, there was a man I Germany back in the 20'sZimmerman who took from the ppl who had and gave it to his army and followers, his name was Hitler, and he killed millions of ppl. Obama must be stopped ........
Posted......;-)

Anyone who was paying attention was warning people about this five years ago. James Simpson wrote his famous article "Barack Obama and the Strategy of Manufactured Crisis" back in September 2008 before the commie creep was elected. All about Alinsky, Ayers, Cloward-Piven and more:
REQUIRED READING:
http://www.americanthinker.com/2008/09/barack_obama_and_the_strategy.html

If there's a silver lining here, it's that Obama's well established record of duplicity and deceit have made it unlikely that he'll gain further converts. Those who've regarded him skeptically up to now have hardened in that posture. If he's going to spark an uprising, he'll have to make do with the army of cretins he's already marshaled.

If you guys are denying the existence of a rentier class that financializes everything and produces nothing, then there truly is no hope for us. Everything you say about Alinsky, C/P and Obama is true - and yet you cannot see that both parties enable control fraud at the top, that real assets are being purchased with counterfeit credit, and the middle class is being ground up by many of these "capitalists" we defend. So sad that the truth is once again the real victim here.

Democrats are promoted by an unethical Media Establishment as being brilliant. It is stunning to see the lean towards collectivism these days. It is no longer the 1930's, 1940's, etc. Having experienced first hand the effects of communism, as well as the weaker systems of socialism, it amazes to consider the Democratic Partisans like Obama are busy vilifying others to push this oppressive folly. How could he be hyping 'green' energy after billions wasted in Spain, resulting in an obscene deficit with nothing to show for it but massive unemployment? The collectivist failure always cements economic classes, crushes growth/innovation, kills incentive, ruins opportunity, devastates competition, raises the cost of living, lowers the quality of life, even oppresses basic freedoms suppressing cultural expression, etc. But Democratic Partisans have grown wealthy off of exploiting the Public Sector, using taxpayer funds to finance their own lives and their corrupt political machine (* especially Union Labor which launders taxpayer money back to the Democrats). Thus like Benghazi, Obama and others simply lie about the reasons for the need to continue to rip off everyone. Barack Obama has been exposed long ago as being as big of a fraud as the Clintons. He has lied about all, transparency, taxation, lobbyists, rendition, wiretaps, spying, drone assassinations, executive orders, signing statements, war, "no meddling", etc. On top of it all, he is a vicious partisan who is overtly divisive. This is no leader. Even the loftiest vision of 'hope and change' was exposed long ago as nothing more than a cash for clunker - shovel ready flop dedicated to build more roads. It is a tragedy.

Anonymous above, you are a useful idiot. There is some truth to what you are saying, but this class, to the extent that their gains are unfair, are the "connected". Not everyone who is successful is in that class. Obama is fomenting a revolution against everyone who is above average in wealth or income, but if and when there is a revolution, it will not be the connected who will suffer.

Inequality is a new indoctrination buzzword forced on young people. I checked out several university economics department course offerings recently. Instead of seeing courses on micro and macroeconomics for basics, they offer "Economics of Inequality".