In a single paragraph, a commenter destroys the National Journal's Matthew Cooper and his 'no voting fraud' fantasies

Writing at the hard left National Journal, someone named "Matthew Cooper" (if that is his real name), proffers the insane notion that vote fraud really isn't a concern in the U.S.

...voter-ID laws generally represent an answer in search of a problem. There just isn't much evidence of voter fraud...

...Civil-rights groups have been apoplectic about these laws, saying that they are discriminatory. And they would seem to have a pretty good case, as there's no fraud epidemic and those who would have the hardest time complying with the law are poor and minorities. That's because minorities and the poor are much less likely to have the kind of government-issued photo IDs that some states require...

This article makes me lose respect for your publication. Most democracies in the world require a photo voter ID, and it is part and parcel of democracy. I have personally been an accredited international election observers in six foreign elections where the country had long required photo ID to vote. There was no suggestion at any time from ANY side that this produced any ''vote suppression'' whatsoever. What it produced was an honest vote. Republicans are quite right to protect our election process, and Democrats are scoundrels to demagogue this issue. I have also worked in an election campaign, in the 4th district of North Carolina in 1972, where the election was stolen by voter fraud, so I get the fact that this is a problem that needs to be corrected.

It would seem Cooper missed the story about the "Mississippi NAACP leader sent to prison for 10 counts of voter fraud." 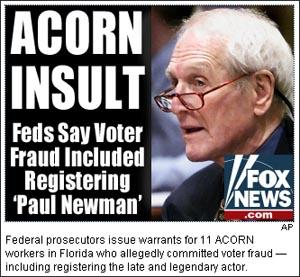 And the fact that more than 50 people employed by or linked with ACORN have been convicted of voter fraud.

During the 2008 election cycle alone, ACORN was linked to as many as 600,000 bogus voter registrations. Combined with their tactics of encouraging early voting and use of absentee ballots, it is an indisputable fact that ACORN was and is responsible for widespread election fraud.

17 seconds using Google would have allowed an honest journalist to investigate vote fraud (the elections of JFK and LBJ being archetypes of Democrat vote fraud).

But because this is National Journal -- and some hack named "Matthew Cooper" -- we're talking about, any connection to the truth is purely coincidental.


Related: If you read the list of things you need an ID to do, you would -- if you had an ounce of intellectual honesty -- admit that the entire bogus voter ID controversy is about one thing: the Democrats' insatiable desire to destroy the integrity of the ballot box.

I try to keep an updated list of election fraud by state but there's so much of it I'm always behind: http://www.jpattitude.com/ElectionFraud.php

Always remember, the election fraud that's caught and prosecuted is a tiny fraction of the total. Vote fraud is notoriously difficult to catch and prosecute which is why prosecutors avoid the issue like it's the plague.

The link to OneAngryman was flagged by WOT as a dangerous site.
I've seen this before applied to conservative sites to block them.