Lindsey Graham: Either we kill some camels in Syria or Charleston could get nuked by Iran!

The adjectives for this level of idiocy escape me. 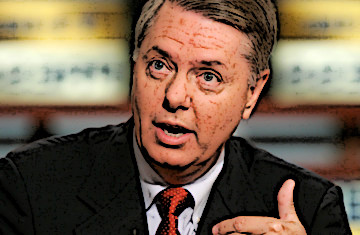 He says if there is no U.S. response, Iran will not believe America’s resolve to block Iran from developing nuclear weapons [and] those nuclear weapons in the hands of terrorists could result in a bomb coming to Charleston Harbor.

He says he’s working to convince South Carolinians weary of war that the situations in Syria and Iran are linked. Graham says Syria could destabilize the entire Middle East...

So, Lindsey, firing a "shot across the bow" -- in Obama's words -- will somehow deter a nuclear Iran?

So, Lindsey, launching an attack "just muscular enough not to get mocked" will subdue Iran?

You're a joke, Senator Graham. You're a joke and a disgrace. And you need to go. My hope for 2014 is that a primary challenger will emerge and defeat you.

If they bomb Charleston harbor then we wont have to pay to have it dredged.They just finished a 2 year study on deeping it that cost millions

In the pic of Lindsey associated with this story, what is that on his face and hands? Jock itch?

Is that why the US Airforce moved Nukes to Charleston, to make a bigger boom?