Randy Forbes is a lonely man. President Obama’s stewardship of American armed forces has been a dismal failure, yet few on Capitol Hill have waved red flags over it. 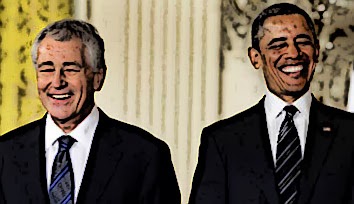 Forbes, however, has been waving them furiously.

The Republican congressman from Virginia recently penned a pointed letter to Defense Secretary Chuck Hagel. It’s a warning shot, discharged in anticipation of the Quadrennial Defense Review, the report the Pentagon must deliver to Congress every four years to layout the long-term plans, concerns and requirements for the armed forces.

“The QDR has become an exercise in lowest-common-denominator thinking that fails to light a way forward for our long-term military planning,” Forbes wrote Hagel. The lawmaker fears that the forthcoming QDR will amount to little more than a rubber stamp for slashing military capabilities and lowering readiness.

Forbes should prepare to be disappointed. By all accounts the QDR is in the can. The administration is simply debating whether to release it before—or after—it submits its FY2015 budget. Regardless of the sequence, both documents will likely hit the street early next month—just in time for March Madness.

And “mad” is the reaction the QDR is expected to generate among those who hope to maintain America’s status as a global superpower. Officials involved in putting the report together have indicated that its assumptions and its vision for the armed forces of the future won’t stray too much from the Strategic Choices and Management Review (SCMR) that Hagel ordered after he came into office.

The SCMR (which critics have taken to pronouncing as “scammer”) put the Pentagon on a path to austerity. The problem is that path was selected—not on the basis of any strategic analysis or analytical study—but because of purely budgetary desires. The president has designated the Pentagon as the primary “donor” for fiscal restraint—even though that means downsizing forces and reducing military capabilities.

Others in Congress will likely follow Forbes’ lead in dismissing the QDR upon its arrival. Unfortunately, many of them will so out of sheer indifference to the issue, rather than out of Forbes’ informed concern.

Hill indifference to a hollowing military became apparent after the Ryan-Murray budget deal. As the sequester started to take effect on the armed forces, the Hill got an earful about it damaging impact on military readiness. Congress responded with a budget bandaid, delivering partial, temporary relief from sequester cuts. This spared the armed forces an immediate crisis, gave Congress no reason to quite worrying about the future of America’s defense.

The palliative effect of Ryan-Murray will soon wear off, leaving the military in no better condition than before. And, the budget-driven (rather than needs-based) QDR won’t offer any serious answers for how Washington can ensure sufficient military capability to protect U.S. vital interests over the long-term.

Rather than suggest how to solve Obama’s military muddle, the QDR is likely going to cement the status quo. And, the status quo isn’t pretty.

Every armed service will likely wind up smaller than it was on 9/11. Does that really make any sense? Is the world a less dangerous place than it was then? In Congressional testimony, the Director of National Intelligence just admitted that Al Qaeda is as dangerous as ever. China is on the rise. The Middle East is a mess. Russia is restive. A smaller military in today’s world makes no sense.

The operational demand on our troops is likely to go way up, too. After decrying that our men and women in uniform have had to endure too many combat tours and spent too much time away from their families, the plan is to meet future worldwide demands for military forces by deploying troops more, not less, often. Expect special-operations forces and the Marine Corps to be particularly hard hit.

As for materiel, the post-Cold War “procurement holiday” is starting to look like a permanent retirement. Virtually every major acquisition program will be thinned down and stretched out.

To meet the demand to do more with less, each service has chosen a different path to accommodate austerity. The Marine Corps, for example, plans to preserve readiness at all costs. The Army, which provides much of the backbone for all of the services, is going to a tiered-readiness model. In other words, some of the Army will ready to go; most of it won’t.

The Air Force is willing to sacrifice almost everything to save its modernization program. That choice assures that the Air Force will be able to fight two decades from now. But fighting now will be more of a challenge. The Navy is desperate to salvage its ship-building program and sustain forward presence in the Pacific.

Each of these disparate paths makes sense for each service. But different paths are unlikely to deliver a joint team that can cover all the nation’s global vital interests. Some missions, like homeland defense, look like they might fall off the plate all together.

Most disturbing of all is the fact that the QDR will jettison the concept—if not the words—that U.S. forces will have the capacity to deal with—and thus deter—two major conflicts at once (often called the two major theater capability).

The major problem with the force structure anticipated in the QDR is that it will only encourage bad behavior from America’s competitors. Seeing that we lacking the capacity to do sustained operations, our enemies will be emboldened to create conditions of conflict that would require the United States to make protracted commitments to win.

Knowing that the U.S. will have limited capacity to do more than one thing at a time, adversaries will want to coordinate their actions to give America multiple problems at once. We can anticipate, for example, that Iran and North Korea will start pushing Washington’s buttons at the same time.

Understanding that the U.S. will have limited conventional forces, smart adversaries will put more emphasis on building up strategic arsenals to deter the U.S. from using them and risking quickly escalating to nuclear confrontation.

The administration’s path forward just buys problems and guts the capacity to deal with them. President Obama’s grand plan, of course, has been to substitute soft power for hard capabilities. But looking at how well that has worked—in places like Iraq, Syria and Iran—it’s no wonder Rep. Forbes is worried.

The QDR will quickly come and go. Next up will be a report from the Congressionally chartered National Defense Panel, which is charged to provide an independent assessment of the QDR.

It is not clear what direction the bipartisan NDP panel will take. But its report will likely get more congressional attention and consideration than the QDR, which many have already written off as a make-work exercise.

Even a clear, honest, forward-looking NDP report isn’t likely to change the blasé attitude of the administration and the Congress in the near term. But it might well get some visionary leaders thinking about what to do once the consequences of what the White House is doing now become undeniably clear to all.

James Jay Carafano is vice president for foreign and defense policy at The Heritage Foundation.

Just look at our "allies" in Europe to see the end result of this type of policy.

The UK and France have, between them, ONE aircraft carrier.

If you want to keep a naval asset on station, you actually need three of them for each location.

Remember when France let one of its celebrities convince their government to go to war against Libya to topple Khaddafi? Three DAYS in they had run out of ammo and had to be rescued by the US (Hillary convinced Obama to "lead from behind").

Of course, they have the US taking care of 99% of their security needs. Who's going to go to bat for the US once the Democrats succeed in bringing our military to pre-WWI levels?

You can look at the ISAF web page for specifics, but the UK notably acknowledged last year (might have been the year before) that they can't field a full brigade of troops. A brigade is roughly 4000 troops. Meaning they are essentially worthless and we parked them in a relatively hospitable area. The Canadians send us 500 troops to the theater of choice (a Battalion, but not since 2/3rds of a unit is non-combat). The French had a whopping 2000+ people in Afghanistan, and they were worthless as well. So we follow suit, and cash in the military for welfare programs...but there is no US of A with a big army to back us up. Not a good program.