Scientists say they have observed a record-breaking impact on the Moon. 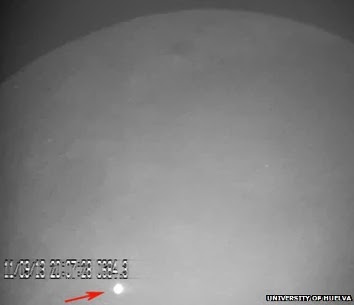 Spanish astronomers spotted a meteorite with a mass of about half a tonne crashing into the lunar surface last September... They say the collision would have generated a flash of light so bright that it would have been visible from Earth.

...Unlike Earth, the Moon has no atmosphere to shield it from meteorite collisions, and its surface shows a record of every strike.

The impact is said to have left a crater more than 40 meters wide, or roughly the circumference of Michael Moore, if memory serves.