Democrat Utopia of Illinois Sucking the Life Out of Small Business

For 16 years, she and her husband, Stephen Briggs, have owned and operated a teacher supply store, Ergadoo, in Springfield. 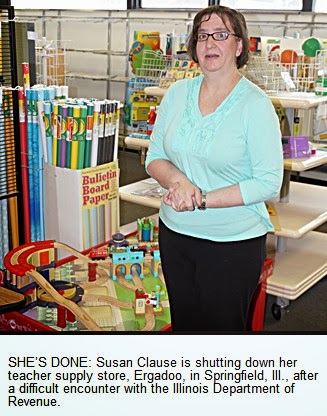 They love their business, and it’s making money, but they are shutting it down this week.

Why? They say the state of Illinois has made it too difficult to operate.

It’s a painful decision for the couple who founded the store 16 years ago.

After all, they aren’t quitters by nature. They fought to keep the doors open when Clause was fighting leukemia and Briggs was battling prostate cancer – at the same time.

And there have been tough days when they have found themselves unloading truckloads of merchandise by themselves or wading through reams of paperwork.

But now they are facing an obstacle they just don’t want to deal with: the Illinois Department of Revenue.

Here how Clause explained it:

For 10 days last month, a state auditor camped out at their store – sitting at one of those tiny little children’s tables – reviewing three months of receipts.

And that’s where the problem began.

You see, Ergadoo is the sort of business that has many nonprofits as customers – schools, churches, nurseries.

Those types of organizations don’t have to pay sales taxes.

So, teachers, church secretaries and principals often come in bearing letters from the Illinois Department of Revenue declaring their organizations’ sales tax exemptions.

Clause and her husband dutifully record the transaction – along with their tax exemption number.

Well, no. The Revenue Department says that’s not good enough.

Clause said the Revenue Department told her it’s her store’s responsibility to determine where the customer’s money comes from.

“How am I supposed to prove if someone comes in with a $20 bill and a tax-exempt letter whether that money is from a school’s petty cash fund or someplace else? I can’t. No one can,” Clause said.

The reason behind the rule is to keep people from borrowing a letter from a nonprofit and stocking up on stuff for their own personal use.

But like so much bureaucrats do, no common sense is being applied here.

You know, ones like “Clock watchers, time will pass. … You may not.”

And I’ll go out on a limb here, it’s hard to believe this sort of thing would be used any place but in a classroom.

After examining three months of transactions such as these the auditor declared that the store owed $800 in back sales taxes.

“I told the auditor the state spent more to have you here for 10 days than it will end up collecting,” Clause said.

Then the other shoe dropped.

“We were told the state would plug the findings of the audit into some sort of formula and come up with a tax bill for the last three years. We’re guessing that will be about $8,000,” she said.

After the salaries they drew from their business that $8,000 is more than the store’s profits for the past two years.

“We operated under the assumption that we were doing things right – the last auditor told us we were. Now we are being told differently and having to pay back taxes. Sure, we could appeal this or go to court. But we don’t want to hire a lawyer – that would cost us more than they say we owe. So we are shutting down.”

Fortunately, Clause and Briggs have an alternative – they are expanding the children’s museum they operate next door, Ergadoozy, into the area the store is vacating.

But Springfield educators now will have to drive 70 miles to Peoria if they want to shop at a teacher supply store. Or more likely, they will buy online from some out-of-state firm, and Illinois will lose even more commerce.

Clause and Briggs are losing the business they have nurtured for 16 years.

Briggs put it this way: “This is government. It’s not supposed to make ‘sense.’ It’s about dollars, and government trying to find a way to suck them right out of your pocket.”

Scott Reeder is a veteran statehouse reporter and the journalist in residence at the Illinois Policy Institute. He can be reached at sreeder@illinoispolicy.org. Readers can subscribe to his free political newsletter by going to ILNEWS.ORG or follow his work on Twitter @scottreeder.

This is our future. A revenue-police state. What else can they do (other than commit voter fraud) to sustain their empire?

On a larger scale, could someone please explain why the GOP can't threaten to defund the IRS until an actual investigation begins and Obama addresses the issue to the American people. That is to say, is there a procedural or legal problem with them doing it? (I know they'll never do it because they're total cowards).

"On a larger scale, could someone please explain why the GOP can't threaten to defund the IRS until an actual investigation begins and Obama addresses the issue to the American people. That is to say, is there a procedural or legal problem with them doing it? (I know they'll never do it because they're total cowards)."

Because the GOP thinks it is perfectly OK. They want the IRS to get rid of the Tea Party and teach the common masses to STFU unless they are contributing to an establishment GOP PAC.

Illinois democrats wasted a 67 % rise in income tax rates ...They spent and wasted money so they bother hard working people .. no wonder Illinois is 2nd in people leaving the state with highest unemployment in the USA
all the corruption waste and free money dems give out to illegals makes Illinois a state to avoid in business

read another story here.. establishment repubulicans joining obama to harass tea party
Boehner long ago would have a select commitee to look into IRS ,, but he and the rinos want to get rid of the tea party
no money no vote for 2014 rinos !!!!!!!!!!!!!!!!!!!!!!

Fuck The Tax Collectors. May they occupy a special place in hell when they pass from this Earth.

I was tagged in WA State for not filling an electrical permit out correctly - in spite of following all written directions. I took the demerit but in the process found that the new requirement represented the un-written wishes of Washington's Chief AssHat Electrical Inspector.
This is Goobermint at its finest, they have you by the nads because they wish to, it keeps them in control.