The U.S. Department of Labor handed over $275,000 in taxpayer-funded grants in 2009 to an organization that claimed to be a charitable nonprofit with tax-exempt status from the Internal Revenue Service.

But that organization was not officially certified as a 501(c)3 charitable nonprofit until 2010, documents show.

The Restaurant Opportunity Center, or ROC-United, a national organization working to raise the minimum wage and improve working conditions for restaurant workers by combing the labor organizing muscle of powerful unions with Occupy Wall Street protest tactics, got the grant anyway.

The group is organizing several high profile events this week to highlight the $2.17 national minimum wage for tipped workers.

In the 2009 grant application, ROC United submitted a letter to the Department of Labor that showed the IRS had granted tax exempt status to ROC New York — an affiliated but legally separate organization — even though the $275,000 grant would flow to ROC United.

The department was either fooled by the application or didn’t check it closely enough.

Either way, ROC was awarded the grant through the Susan Harwood Grant Program, which is supposed to be limited to 501(c)3 charitable nonprofits, a status not granted to ROC United until June 2010.

“This is also further reason why ROC should not be receiving taxpayer funds. ROC takes taxpayer money, then turns around and lobbies Congress and pushes labor-backed initiatives across the country,” said Mike Paranzino, communications director for ROC Exposed, a political nonprofit that obtained the 2009 grant application via a Freedom of Information request.

Documents obtained by ROC Exposed show that when ROC United applied for the federal grant in August 2009, the group was in the midst of a back-and-forth battle with the IRS over its tax status. 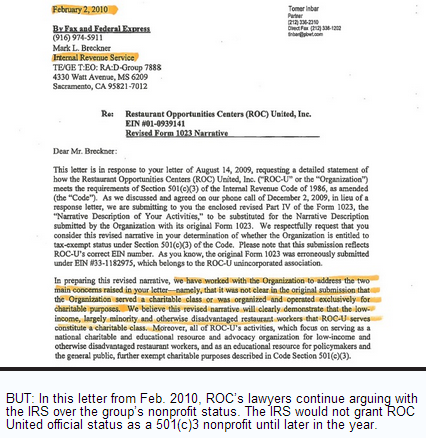 On the application, ROC United claimed to be a “nonprofit with 501(c)3 status.”

But six months later, in February 2010, lawyers representing ROC United were still haggling with the IRS over the organization’s status, and indicated in a letter that the IRS hadn’t granted ROC United official 501(c)3 status.

By that time, the grant records show, federal cash was already flowing to the organization.

When the Labor Department announced the grants in 2009, the award given to ROC United was supposed to “provide training to small restaurant employers” and to develop “local health and safety committees for ongoing workers and employers.” The grant said ROC United would provide training to 50 restaurants and an estimated 2,000 workers in Chicago, New York, Detroit, Los Angeles, Miami and Washington, D.C.

Since 2009, affiliates of ROC United have sprung up in each of those cities.

But training workers on safety issues is hardly the organization’s primary purpose.

Founded after 9/11 to help restaurant workers displaced from their jobs in lower Manhattan, ROC has morphed into a national organization with branches in most major cities. The organization’s goal is “to improve wages and working conditions for the nation’s restaurant workforce,” according to its website, which brags about ROC’s role in several states’ recent decisions to raise the minimum wage.

The organization has helped organize protests against several restaurant chains and is helping promote protests on Thursday — February 13, a date meant to draw attention to the $2.13 per hour wage for tipped workers — around the country.

The group joined U.S. Sen. Sherrod Brown, D-Ohio, on Wednesday for a conference call urging an increase to the national minimum wage, and ROC United bragged on its Facebook page about being at the White House for an event focusing on the minimum wage. 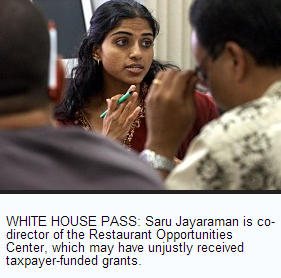 The group has slowly gained more influence with the Labor Department since that initial 2009 grant, regardless of whether the grant was obtained properly.

In 2011, the department announced an “alliance” with ROC to promote workplace safety.

Its success has caught the eye of major unions, who see service sector employees as a new frontier in labor organization.

“All over America, workers are organizing in all kinds of ways, and they call their unity by all kinds of names — workers’ unions, associations, centers, networks,” said AFL-CIO president Richard Trumka in September, praising ROC United’s executive director Saru Jayaraman for her role in organizing restaurant workers.

While ROC United puts pressure on restaurants to increase wages, Congress might soon put pressure on them.

Two years ago, the House Oversight Committee caught wind of the 2009 grant application and the seemingly inaccurate representation of the group’s tax exempt status.

In a letter to the Labor Department, committee chairman Rep. Darrell Issa, R-Calif., asked for information about that questionable 2009 grant and why it was awarded when the organization wasn’t yet recognized by the IRS as a nonprofit.

“ROC’s history of intimidation towards opponents and management problems with its own restaurant raises significant questions about why DOL decided to form an alliance with and provide federal funding to the organization,” Issa wrote.

The grant is one of six taxpayer-funded grants ROC has received from the federal government — the other five came from the U.S. Department of Health, federal records show — totaling more than $1 million.

Caitlin Carroll, spokeswoman for the House Oversight Committee, said lawmakers and staff are currently reviewing additional materials received from the Labor Department concerning the issues raised in the July 2012 letter.

Boehm is a reporter for Watchdog.org and can be reached at EBoehm@Watchdog.org. Follow @WatchdogOrg and @EricBoehm87 on Twitter for more.

House Oversight Committee? Yeah, Issa will get to this after his 83 other investigations. What a joke