OH, MY: Citizens of Ukraine Demand Their Own Second Amendment 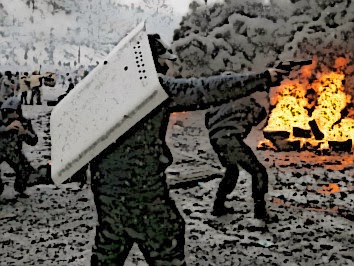 The Ukraine Gun Owners Association wants the new government to add their own right to bear arms to the country's constitution.

As of today Ukrainian Gun Owners Association will start to work on the preparation of amendments to the Constitution, which will provide an unconditional right for Ukrainian citizens to bear arms.

People gathered in Independence Square in Kiev after President Viktor Yanukovich rejected a European Union trade deal for a $15 billion bailout from Russia in November. It was relatively peaceful for three months, but violence escalated on February 18. Over 70 people died during the week and amateur videos showed snipers shooting at unarmed protesters.

People should have the right to bear arms, which will be put in written into the Constitution.


Authorities should not and will not be stronger than its people!

Armed people are treated with respect!

America's founding fathers implemented the Second Amendment because it is a natural right for people to defend themselves.

According to GunPolicy.org, Ukraine's gun laws are described as restrictive. The government owns seven million guns while there are only three million guns for private citizens. A citizen must prove they have a legitimate reason to own a firearm.