War On Terror: New information about a sniper assault on Silicon Valley's phone lines and power grid has raised fears that the nation's power grid is vulnerable to terrorism.

The prospect that the unsolved attack on an electrical substation near San Jose just hours after the Boston Marathon bombing in April could have been a terrorist act was raised anew last week by Jon Wellinghoff, former chairman of the Federal Energy Regulatory Commission.

"This is the most sophisticated and extensive attack that's ever occurred on the grid to my knowledge," he told the Associated Press, contradicting FBI denials that terrorism was involved. "I don't know what the definition of terrorism is other than when an extremely well-trained group attacks a major piece of infrastructure in an expertly planned attack." 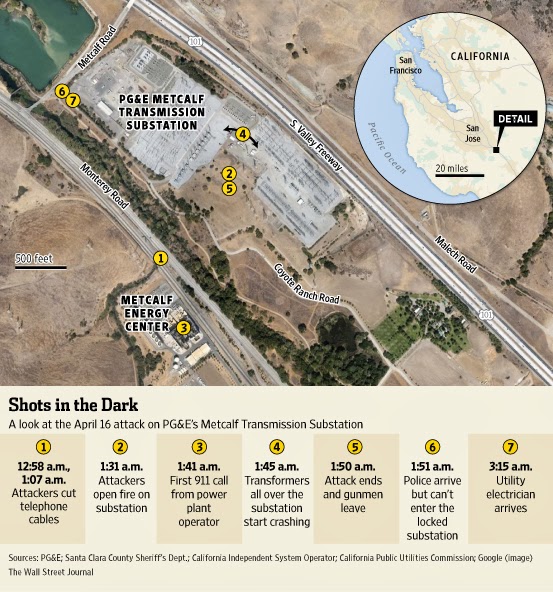 Wellinghoff also mused recently that the attack might have been a dress rehearsal for a more widespread attack on a national grid vulnerable to disruption. "There are ways that a very few number of actors with very rudimentary equipment could take down large portions of our grid," he told Foreign Policy. "I don't think we have the level of physical security we need."

An attack by intruders with guns and rifles could be just as devastating as any cyberattack, he said.

The Wall Street Journal reported on Thursday that in just 19 minutes, gunmen fired more than 100 rounds into substation equipment, disabling 17 of 20 big transformers, causing about $16 million in damage.

Last October, former CIA Director Jim Woolsey said a video showed three or four men carried out the attack in a "disciplined military fashion," systematically firing their weapons and "quickly and professionally disposed of everything they had." This was no mere act of "hooliganism," he said, but rather "a systematic attempt to take down the electric grid."

"These were not amateurs taking potshots," Mark Johnson, a former vice president for transmission operations at PG&E, said last month at a conference on grid security. "My personal view is that this was a dress rehearsal" for future attacks.

Part of the problem is a porous southern border through which what the Border Patrol calls OTMs (other than Mexicans) cross in significant numbers. If the cartels can smuggle drugs and people into America, Hezbollah and al-Qaida have to know they can smuggle in trained terrorists. Politicians like to talk about repairing infrastructure. How about protecting it?